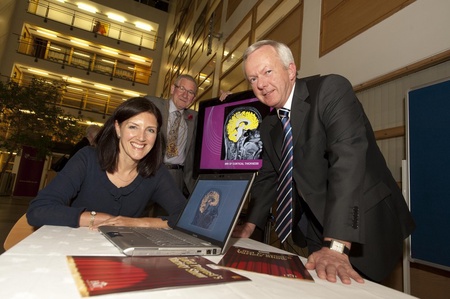 The Lord Provost’s Variety Show has raised £30,000 for dementia research at the University of Aberdeen.

Lord Provost Peter Stephen visited the University’s Institute of Medical Sciences last night (WEDNESDAY) to hand over the proceeds from the show on behalf of the Lord Provost’s Charitable Trust, which nominated the university as the beneficiary of the show at His Majesty’s Theatre in October.

The money will support the Brain Imaging Team, which is working on a number of innovative projects at the forefront of the fight against dementia and has made significant progress in utilising brain imaging techniques to detect the early causes of diseases leading to dementia in older people.

The £30,000 will help to buy new equipment for an MRI scanner, which will allow faster and more detailed images of the brain, allowing detection of the earliest evidence of brain disease.

“The use of innovative technology to support this research is crucial, and we are extremely grateful for this support from the Lord Provost’s Charitable Trust which will enable us to continue to make significant process in this important area of medical discovery.”

Scottish star Elaine C Smith and Steve Robertson of Scotland the What? headlined the show, which celebrated the best of professional entertainment from across the country in two packed performances of music, comedy and dance.

Everyone involved gave their time free of charge and the proceeds came from ticket sales.

Lord Provost Peter Stephen said: “Once again I was overwhelmed by the fantastic response to the Lord Provost’s Variety Show, which really showcased all the talent that Scotland boasts.

“I am absolutely delighted that we were able to hand over so much money to the University of Aberdeen to help with its vital research into dementia.

“I’d especially like to thank all the cast and everyone involved behind the scenes, who so generously gave their time for free, as also TAQA, who kindly sponsored the show for a second year.”

The Lord Provost’s Charitable Trust is a fund independent of the City Council, which was set up for the millennium to support good causes of all kinds in Aberdeen.