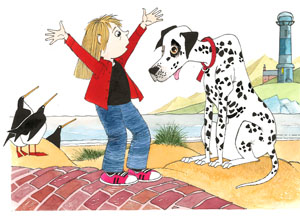 A new Doric book produced by Aberdeen’s Reading Bus will be launched at the University of Aberdeen today (Thursday, November 4).

Millie, written by Sheena Blackhall and illustrated by Bob Dewar, will be the centrepiece of an event to encourage reading and storytelling at the Linklater Rooms in King’s College.

Millie is the fourth commercial publication published by The Reading Bus and follows Fit Like, Yer Majesty?, Nae Bad Ava!, and Fit’s for Supper? It tells the story of a beloved Dalmatian dog who travels around the North East of Scotland stealing sandwiches and goodies from unsuspecting posties, fisherman and golfers.

The Reading Bus is a city based service which delivers a highly innovative, motivating and successful literacyprogramme in regeneration areas of Aberdeen.  This ground breaking project has succeeded in promoting reading as a lifelong pleasure, raising attainment and achievement of children at risk of early failure and involving and empowering parents in their children’s learning.

At the book launch, pupils aged six to eight from Tullos, Walker Road, Quarryhill, Kittybrewster, St Peter’s and Cornhill primary schools will come face-to-face with the real star of the book.

The event will also be attended by Ian Hudghton MEP, and Professor Chris Gane, the University of Aberdeen’s Vice Principal for Culture and Communities.

There will be a reading of Millie in Doric by Sheena Blackhall as well as in Polish by two mums from St Peter’s RC School, which will then be broadcast over the internet.

To complement the publication, a Millie Animation has been created by primary five and six pupils at Cornhill School, where the youngsters have also composed their own Millie rap, and they will share a sample of their work with the audience.

Following on from the book launch, a Millie Tour will see The Reading Bus visit more than 30 locations across Aberdeen city and shire with Sheena Blackhall onboard to entertain pre-school and early years pupils with readings, songs, rhymes, stories and animated films.

Sheena said: “Millie's adventures will spread round the globe. The spotty Dalmation who's naughty but nice.

“They'll hear it in Doric, in Polish, in French. On the world wide web, she'll make friends in a trice!”

Jenny Watson, Reading Bus Development Officer, added: “The Reading Bus team is very excited about the launch of Millie and we hope that it will bring a smile to the faces of youngsters of all ages.

“The Reading Bus works closely with the University of Aberdeen and it is an inspiring setting for the launch of our latest publication.

“Look out for the Millie Tour of The Reading Bus with Sheena Blackhall that will be visiting locations across the City and Shire.  And if you see the real Millie - hold onto your sannies!"

Professor Gane said “The Reading Bus does a fantastic job in inspiring young people in a wide range of educational activities.

“It is important that children are inspired by reading and learning from a young age and we are delighted to lend our support to the launch of Millie.”

“The Doric dialect is an integral part of the heritage of north-east Scotland and I am pleased to see it used in a new book for children.”

Millie is written in Doric, with an English translation, by Sheena Blackhall, illustrated by Bob Dewar and edited by Bill Burnett. The book will be launched on 4th November and will be available in all good bookshops at the bargain price of £5.99.  Copies can also be ordered through the dedicated Millie Website - http://web.me.com/readingbus/Millie

The Reading Bus is a city based service which delivers a highly innovative, motivating and successful literacy programme in regeneration areas of Aberdeen.  This ground breaking project has succeeded in promoting reading as a lifelong pleasure, raising attainment and achievement of children at risk of early failure and involving and empowering parents in their children’s learning.

The multi-coloured Reading Bus visits schools and community locations and welcomes onboard youngsters and families for a wide literacy programme including storytelling, author visits, read together sessions, poetry and puppet work.  The project also includes a film animation and radio programme as well as having its own in-house publishing company called ‘Bus Stop Press’.

Sheena is a poet, short story writer, novelist and illustrator. She is also a traditional ballad singer and registered storyteller, who lives in the North East of Scotland. From 1998-2003 she was Creative Writing Fellow in Scots at Aberdeen University's Elphinstone Institute, and in 2007 was Creative Writing Tutor with the Institute for Irish and Scottish Studies at Aberdeen University. Blackhall writes in Scots and English. Two of her children’s plays have been televised. She has published four Scots novellas, 10 short story collections and 67 poetry collections. She has won several national and regional awards for Scots poetry, Scots singing and Ballad writing, and short-story writing. In 2009, Sheena Blackhall was inaugurated as Makar for Aberdeen & North East Scotland.

Bob worked for D.C. Thomson on almost all their publications.  He was also the political and social cartoonist for ‘The Scotsman’ newspaper for fifteen years.  Bob has illustrated business books for ‘Oxford University Press’ and numerous children’s books.  Other clients include Scottish Field, Black & White Publishing, A.C. Black London, Itchy Coo and so on.

This is the in-house publishing company established by The Reading Bus in 2008.  This will be the fourth commercial publication and follows the huge success of ‘Fit Like, Yer Majesty?’, ‘Nae Bad Ava!’ and ‘Fit’s for Supper?’.  Reading Bus Press has also published ten books written and illustrated by children.  All profits generated from the commercial books are reinvested in The Reading Bus initiative.