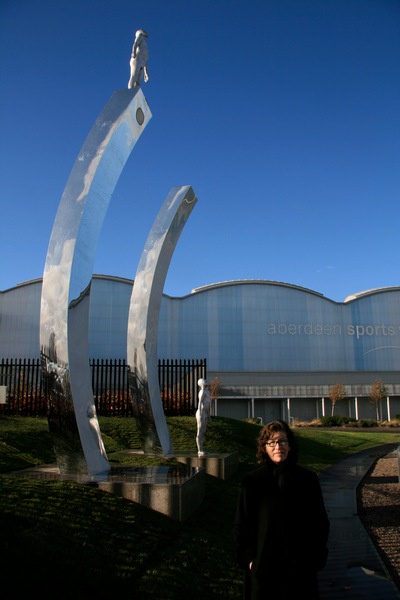 A new piece of public art by an internationally acclaimed artist has been unveiled at Aberdeen Sports Village today (Wednesday November 3).

Steinunn, a sculptor born in Reykjavik, has created ‘Waves’ – a pair of figures in cast aluminium, one standing at the bottom of a curved steel column and the other at the top of a curved column, which overlook the running track and can be seen from Linksfield Road and the grandstand at the outdoor athletics area.

The nine-metre high sculptures were commissioned from a special endowment fund of the University of Aberdeen, which has previously been used for cultural projects such as the Aberdeen Music Prize, writers in residence schemes and a partnership with Scottish Opera.

Aberdeen Sports Village, a joint venture between the University of Aberdeen, Aberdeen City Council and sportscotland, opened its doors in August 2009 and has since attracted more than 575,000 visitors.

Its modern design and hi-tech facilities have already won a number of awards and the University sought an artist whose work would complement the building.

Steinunn has exhibited and worked on prestigious projects throughout the world and her works are in numerous private and public collections worldwide.  Among them are The Royal Caribbean, Hall Financial Group in Texas, The City of Hull in the UK, Kathryn Hall Vineyards in Napa Valley, California, The State Hospital in Denmarkand the private collection of Sir Rocco and Lady Forte in England, and the Collection of Carl Gustav, the King of Sweden.

Steinunn is represented in the UK by Osborne Samuel Gallery in Mayfair, London.

Steinunn said: "The sculpture ‘Waves’ is inspired by the special character of Aberdeen with its open seas and uniquecolour as well as the shape of the Aberdeen Sports Village building.  The work expresses dynamic movement, progress and a journey of discovery.”

“The University’s strategy to enrich life of the community includes investment in art and sports facilities and the installation of Steinunn’s work at Aberdeen Sports Village enhances access to the sculptures and builds on what we have been doing by way of publicly accessible art on campus.

“The silvery aluminium of the figures ties in very well with the pale 'northern' pallet ofcolours chosen for the sports village. Steinunn is an artist of high international standing and the quality of the design finishes off the setting for the building extremely well.”