Leading lights from sport, politics and medicine to be honoured by University
01 November 2010 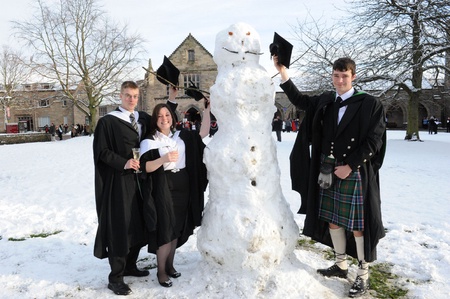 A world-class sportsman, a former advisor to Gordon Brown, and the head of one of the world’s leading medical charities will be honoured by the University of Aberdeen this week.

One of the UK’s foremost rugby players, Chris Cusiter, Former Chief of Strategy to the Prime Minister, Lord Carter of Barnes, CBE, and Director of the Wellcome Trust, Sir Mark Walport will receive honorary degrees at the institution’s winter graduation ceremonies.

Aberdeen-born author Diane Morgan and Lord Lieutenant of Banffshire, Clare Russell will also have honorary degrees bestowed upon them.

Principal and Vice-Chancellor of the University, Professor Ian Diamond said: “The University of Aberdeen is proud to honour these exceptional individuals who have achieved greatness in their respective fields.

“In each of their distinguished careers they have embodied the qualities, values and passion required to make it to the top of their professions. They provide inspirational examples for our graduands who will celebrate their own achievements in graduating from the University.”

The full list of honorary graduands and details of their ceremonies follows:

Thursday November 25 at 11am

Sir Mark Walport is an international authority in the fields of immunology and the genetics of rheumatic diseases.  He has been Director of the Wellcome Trust since 2003.  Prior to joining the Wellcome Trust he was Professor of Medicine and Head of the Division of Medicine at Imperial College London.  He is a member of the Prime Minister's Council for Science and Technology, the India-UK CEO Forum, the advisory board of Infrastructure UK and a non-executive member of the Office for Strategic Coordination of Health Research.  He is also a member of a number of international advisory bodies, including the Grand Challenges in Global Health Scientific Board and the Council of the Global HIV Vaccine Enterprise. He has undertaken independent reviews for the UK Government on the use and sharing of personal information in the public and private sectors, 'Data Sharing Review' (2009) and secondary education, 'Science and Mathematics: Secondary Education for the 21st Century' (2010). He received a knighthood in the 2009 New Year Honours List for services to medical research.

Stephen A Carter CBE, an Aberdeen law graduate, has had a distinguished career in the Communications/Technology and Media industries.  He is currently Executive Vice President and Chief Strategy & Marketing Officer at Alcatel Lucent Inc, based in Paris.  He began his career at J Walter Thompson Ltd, where he was Managing Director and then Chief Executive from 1994.  Thereafter he was Managing Director of NTL UK & Ireland, before serving a term as the Founding Chief Executive of the Communications Competition Regulator, Ofcom.  This was followed by a period in government, first as Chief of Strategy to the Prime Minister, and then the Minister for Communications, Technology & Broadcasting.  He has served on the Board of a number of companies, including Travis Perkins plc, Royal Mail plc, and currently is a Non Executive Director of Informa plc and 2Wire Inc.  Stephen Carter was previously a member of the University’s 6th Century Campaign Board, is a Governor and Chairman of the Ashridge Business School, a Vice President of UNICEF, and a Governor of the Royal Shakespeare Company.  Married with two children, he was made a Life Peer in 2008.

As an author Diane Morgan has raised the awareness of Aberdeen’s historical, cultural and environmental heritage through her research and published work. Born in the city, she graduated MA (Hons) in English Language and Literature from Aberdeen University and subsequently read the Law Tripos at Cambridge.  Returning to Aberdeen, she was a law lecturer, a freelance journalist for national and local media, and in 1974 became the founder of Aberdeen’s quality monthly, ‘Leopard Magazine’, which she published until selling the title in 1988.  She has written five histories in the award winning ‘Villages of Aberdeen’ series, a work on the granite industry and contributed to a study of the architect Archibald Simpson.  Her acclaimed trilogy, on ‘Lost Aberdeen’ was completed last year with the publication of the third volume, Lost Aberdeen: The Freedom Lands. The Granite Mile, a long overdue history of Aberdeen’s main thoroughfare, was published in 2008, and is just out in paperback.

Clare Russell has worked hard, over a sustained period, to promote the rural culture of the North-east and to protect its environment.  Mrs Russell was appointed Lord Lieutenant of Banffshire in 2002.  As Her Majesty's representative, the area of her Lieutenancy includes part of the Moray Council area and part of West Aberdeenshire.  Concerned with identity and heritage, she has been highly successful in not only retaining the old county name of ‘Banffshire’ but also in bringing it to the fore.  She persuaded leading companies, including all the distilleries within the County, to put the name of Banffshire on their products.  Clare Russell was also instrumental in the campaign to install “Historic Banffshire” road signs on the former county’s boundary.  Clare Russell has never rested from promoting the name of Banffshire to great effect, particularly with the publishing of ‘I Love Banffshire’ whose profits have benefitted several Banffshire charities - and to the promotion of the county in marketing and tourism, the result of which has been of great benefit to the local economy.  With energy and drive, in addition to her active public service, Clare and her husband Oliver’s management of her family estate has produced a thriving model enterprise.

Chris Cusiter is a world-class sportsman, a rugby player greatly admired by his peers and followers of the game alike.  His reputation is such that he has been described as potentially Scotland's greatest scrum-half.  His Scotland debut was in the Six Nations Championship match against Wales in Cardiff in 2004, and his first international try followed later that year in the second Test of the tour to Australia. Born in Aberdeen in 1982, Chris Cusiter attended Robert Gordon’s College and had a distinguished career in schools’ rugby.  He subsequently gained a law degree from the University of Edinburgh.  He has played club rugby with Watsonians, Boroughmuir and Borders; he also played for the British and Irish Lions in 2005.  In 2007 he moved to France, signing a two-year deal with Perpignan who play at the Stade Aime Giral.  He then returned to Scotland to play for his current team, the Glasgow Warriors.  Now capped 52 times by Scotland, Chris Cusiter captained the side 8 times last season.   A member of the Scottish Institute of Sport, he is one of this country’s leading sportsmen