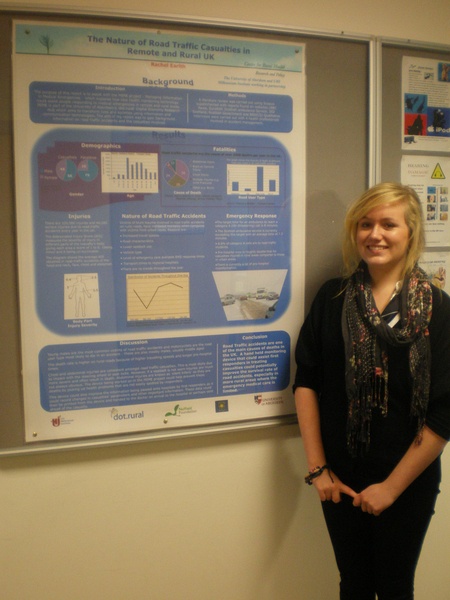 A Highland school pupil has been awarded for her research into rural road traffic casualties.

Rachel Earith – a fifth year pupil from Dingwall Academy - spent five weeks working with University of Aberdeen academics, investigating where and when the majority of road accidents take place, and who is most likely to be involved.

Her work inputted into research being conducted at the University into revolutionary technology which could help reduce deaths on rural roads.

Experts from the institution’s dot.rural research hub are developing a device which would provide medical advice and support for the first person to arrive on the scene of a road traffic accident.

Her findings showed that young males were most likely to be involved in car accidents and that the majority took place in the afternoon and evening. She also found crashes were four times more likely on rural rather than urban roads.

Rachel received a gold CREST award from the British Science Association in recognition of the quality of her findings and her work.

Her placement with the University’s dot.rural team – where she was based at the Centre for Rural Health in Inverness - took place as part of the Nuffield Science Bursary Programme.

The bursary allows school pupils to work on projects with practising scientists, technologists, engineers and mathematicians during the summer holidays, to gain an insight into the world of scientific research and development.

Alasdair Mort from the University of Aberdeen’s dot.rural team said: “Rachel made a fantastic contribution to a very large and prestigious project. She was a pleasure to work with and gained a lot of valuable experience from her placement with us. We wish her the very best for sixth year, university and beyond.”

dot.rural is the RCUK research hub based at the University of Aberdeen which is investigating how digital technologies could transform rural communities, society and business