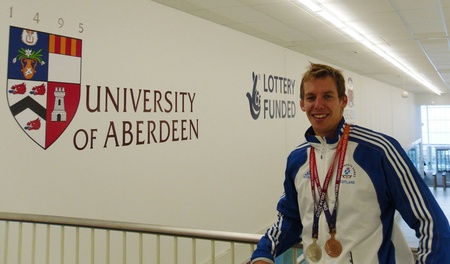 As the north-east’s triumphant Commonwealth swimmers return from Delhi, the University of Aberdeen has launched a new fundraising initiative to ensure Aberdeen has its own state-of-the art aquatics centre.

The move has been welcomed by David Carry, Hannah Miley and Robbie Renwick, who brought home a collective haul of two gold, two silver and a bronze from Delhi, and said the facility would ensure ‘continuing excellence’ in the region.

The Centre will be the second phase of the Aberdeen Sports Village development, building on the success of the £28 million regional sports centre which opened in August 2009 and is a partnership between the University, sportscotland and Aberdeen City Council.

A planning application has now been submitted for the building, which will be on the site of the former Linksfield Academy, and will allow national and international level aquatics events to be hosted in Aberdeen for the first time.

It will provide long lane training opportunities for elite swimmers who currently have no facilities north of Stirling and provide a community facility that will encourage participation in water-based activities at all ages and abilities.

The aquatics centre will include:

·      The only 50m pool north of Stirling, with a dividing boom and part floating floor

·      Full Timing/Video Analysis lab along with a land conditioning area

To ensure that the facility matches the world-class standard achieved at Aberdeen Sports Village, the University of Aberdeen, in association with ASV, is seeking philanthropic support to ensure that a best in class facility is realised in Aberdeen.

The institution has enjoyed previous success in attracting support from the local business community and major donors for projects such as the £21million Suttie Centre for Teaching and Learning in healthcare, one of the most advanced teaching and training centres of its kind in the UK which opened in 2009, and for the new library which will open in September 2011.

The cost of the Aquatic Centre is currently estimated at £24million with the exact budget to be confirmed on receipt of the contractors’ tenders in spring 2011 and a final decision to be made in June 2011. A twin-track approach has been taken to the tender stage which has allowed both the eight and 10 lane options to be costed.

Aberdeen City Council, the University of Aberdeen and sportscotland have already committed funds of £20million but to create a world-class facility additional funding is needed.

The University has already secured a commitment of £1million from a donor who has been engaged with sport at the University and the University’s involvement with Aberdeen Sports Village from an early stage.  The £1million donation will be used to meet the additional cost for a 10 lane pool if this option is agreed by the project board.

Professor Ian Diamond, Principal of the University of Aberdeen, said: “This is an essential step in creating a sporting village which will develop future generations of talent in the north-east of Scotland and help foster a more healthy and active local community.

“We have an opportunity to create an aquatics centre which will benefit Aberdeen and its surrounding areas for decades to come so it is essential we deliver high quality facilities.

“The University of Aberdeen has a strong tradition of fundraising and has enjoyed excellent support from both individuals and the business community. Support for a world class facility has received a tremendous boost from our £1million donor and given the success of the Aberdeen Sports Village we are confident that we will attract the additional support required for this important project.”

The latest plans for the Centre were completed in June 2010 and it is anticipated that on site construction works will begin in late 2011 to enable the Centre to open to the public in early 2014.

The announcement of the fundraising initiative and pledge of £1million to meet the costs of providing a 10 lane pool has been welcomed by the north-east’s successful Commonwealth swimmers.

David Carry, who won an individual bronze medal in the Men’s 400m Freestyle and was part of the silver medal-winning squad for the Men's 4x200m freestyle relay, said: "Our performances in Delhi highlight the incredible swimming talent in the north-east. Aberdeen Sport Village and a new 10 lane, 50 metre pool will ensure continued sporting excellence and lasting legacy."

Hannah Miley, who took gold in Women's 400m Individual Medley, said: “As a swimmer who has done all of my training in Aberdeenshire, I wish to remain true to my roots and I am particularly excited that future swimmers in the region will benefit from such a fantastic facility.”

Robbie Renwick, a fellow gold medallist who took top honours in the Men’s 200m Freestyle and silver in the Men's 4x200m freestyle relay, added: “I have had to move to Glasgow to further my swimming career and one of the factors was the lack of an International standard facility. Having a pool that can accommodate elite training and competition will definitely help retain and develop the stars of the future.”