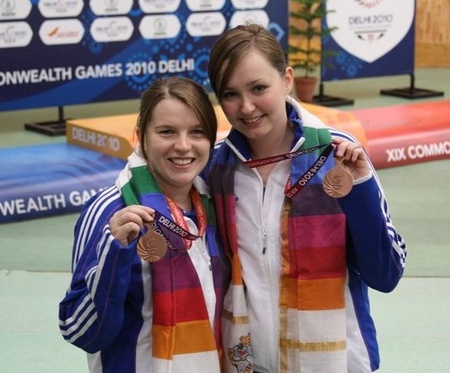 University of Aberdeen student Kay Copland was on target for a gold medal at the Commonwealth Games yesterday.

The third-year music student took top honours in the 50 metre prone pairs with partner Jen McIntosh at the Delhi games.

Copland and McIntosh tied with the English pair on 1,169 points but took the gold on a higher x-ring count, an inner ring within the maximum 10 ring.

Kay, from Banff, is the Smallbore Captain of the University Rifle Club and is in charge of the running of smallbore , helping to  select teams and organising coaching for the rest of the club.

She said she was overwhelmed by their success and that the achievement was yet to sink in.

“I can’t quite believe we actually did it,” she said. “When our coach told us we were in first place I didn’t believe him at first.

“We went into the competition expecting to do quite well and we were hopeful of a medal but when you actually take gold it comes as a real shock.

Drew Leitch, President of Sport , Aberdeen University Sports Union, said: “It is such an incredible achievement – it makes me very proud that a Sports Union member, a full time student and a club captain can strive to not only compete but succeed amongst the best.”