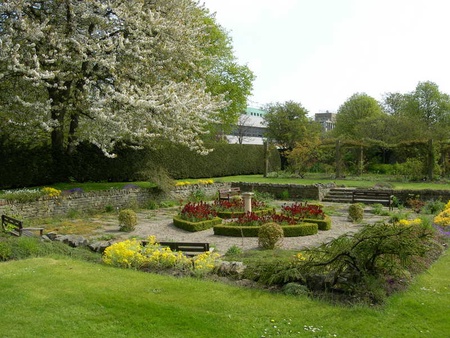 A desire to move to Britain prompted Astrid Fries to pack in her job as an English teacher and leave her homeland of Germany.

“I’d been in Britain a lot during summer holidays and have a love for the country,” said Astrid who then decided a career change was also in order.

“I decided to try gardening but to be sure that this was what I wanted I spent almost two years as a volunteer working at privately owned and National Trust gardens across England and Scotland.

“When I realised that this was what I wanted to do I studied for am HNC in horticulture at the Scottish Agricultural College before completing a one year placement at the Threave School of Practical Gardening in Dumfries and Galloway.”

Astrid has now relocated to Aberdeenshire after being awarded a horticultural bursary studentship by the Friends of the Cruickshank Botanic Garden - it is the second bursary the charity has funded.

“I’m very excited to receive this bursary as I really wanted some experience in a botanic garden,” added Astrid, who was brought up in Mannheim and taught at a school just outside Stuttgart.

“My brother trained as a gardener and I always used to help him when I was about 12 years old. When I was 16 I had to decide between becoming an organic farmer and studying music and English.

“I’m glad I studied English otherwise I wouldn’t be here and Britain feels like home to me but I am delighted to be a gardener now.”

Professor Ian Alexander, Regius Chair of Botany at the University, is Keeper of the Cruickshank Botanic Garden. He said: “We are thrilled to have Astrid who was the best student of her year at the Scottish Agriculture College.

“It is also tremendous that the Friends of Cruickshank have made her post possible with their generous funding.”

This year the Friends’ bursary was made possible by a generous grant of £5000 from the Finnis Scott Foundation http://www.finnis-scott-foundation.org.uk/.

Valerie Finnis (Lady Montagu Douglas Scott) VMH was renowned as a plantswoman and flower photographer, and gardened with her husband, Sir David Scott K.C.M.G., O.B.E., at Boughton House in Northamptonshire.

For more information of the Garden, including revised opening hours, visit http://abdn.ac.uk/botanic-garden/