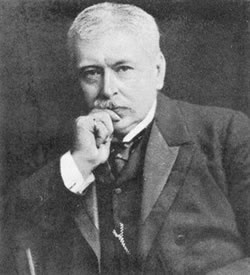 The life and work of a north-east pioneer – most famous for discovering the link between mosquitoes and the spread of malaria – will be celebrated this week.

Sir Patrick Manson, known as the ‘Father of Tropical Medicine’, graduated in medicine from the University of Aberdeen in 1865.

The Oldmeldrum-born scientist is acknowledged as one of the most significant figures in the history of research into parasitic diseases.

While working in Amoy in China during the 1870s, Sir Patrick made one of the most important medical breakthroughs of the time, when he proposed the theory that malaria was propagated by mosquitoes.

This theory was proven by Sir Ronald Ross in 1897, under Manson’s tutorage.

In 1883 Sir Patrick moved to Hong Kong where, in 1887, he established the Hong Kong College of Medicine with fellow Aberdeen graduate Sir James Cantlie, to train young Chinese men in western medicine.

The University will host two events this week, celebrating the 150th anniversary of the scientist’s enrolment at the institution.

On Monday September 13, Professor of Community Medicine at the University of Hong Kong, Anthony Hedley will give a talk at the Suttie Centre for Learning and Teaching in Healthcare, Foresterhill, beginning at 7pm.

The lecture – which is free to attend – takes place in association with the Aberdeen Medico-Chirurgical Society, and will be introduced by Professor Ian Diamond, Principal and Vice-Chancellor of the University of Aberdeen.

Professor Hedley, who is a graduate of the University of Aberdeen, will provide a unique insight into Sir Manson’s life and ground-breaking research into tropical diseases whilst he worked in Aberdeen, Hong Kong and London.

On Friday September 17, Professor Michael Barrett from the University of Glasgow’s Biomedical Research Centre will explain the impact of Sir Patrick’s findings and the present day work being conducted to limit the spread of malaria, river blindness and other tropical diseases.

Tickets to this event cost £5 for adults and £3.50 for children and concessions. A percentage of every ticket sold will be donated to Developing World Health, a charity combating neglected tropical infectious diseases.

For more information on events taking place as part of Techfest In September – which runs from September 10 – 27 - visit http://www.techfestsetpoint.org.uk/tis  or follow TechFest In September on Facebook and Twitter.

In 1866 he became medical officer of Formosa (Taiwan) for the Chinese Imperial Maritime Customs, moving to Amoy in 1871. His duties allowed him to work in local missionary hospitals, where his exposure to dealing with Chinese patients’ diseases made him aware of the shortcomings of British medical training when faced with tropical diseases. While working on elephantoid diseases in Amoy, he discovered in the tissues of blood-sucking mosquitoes the developmental phase of filaria worms.

He also propounded the theory that malaria was propagated by mosquitoes, a theory to be proved by Sir Ronald Ross in 1897.

In 1883 he left Amoy to set up in private practice in Hong Kong, where he was later joined by James Cantlie, another Aberdeen graduate.

Sir James was a Fellow of the Royal College of Surgeons and had been Surgeon at Charing Cross Hospital in London. He resigned to establish the Hong Kong College of Medicine with Sir Patrick, which was formed in 1887 to train young Chinese men in western medicine. The future Chinese President of China, Sun Yat Sen, was one it’s pupils.

Manson’s influence was crucial in recruiting Sir Ho Kai, another Aberdeen graduate, who funded the construction of the nearby Alice Memorial Hospital. The hospital, built in memory of his late wife, was to serve as one of the major teaching hospitals for the College.

When the University of Hong Kong was established under a local University Ordinance in 1911, and students were admitted in 1912, the Hong Kong College of Medicine was dissolved and merged into the University as the Faculty of Medicine. With almost 120 years of history, it is the oldest Faculty in the tertiary education of Hong Kong, and has the longest history of fostering and developing Western medicine for use in the East.

• Through a programme of Science, Technology, Engineering and Mathematics (STEM) activities - of which TechFest In September is the main event — the aim is to engage, challenge, inform and inspire young people and encourage them to choose a career which utilises these skills.