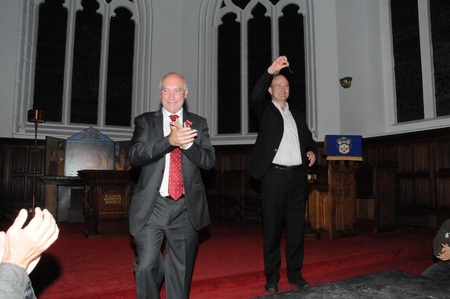 After more than 1,500 weddings, 375 graduation ceremonies and more than 1,000 services, the University of Aberdeen’s Master of Chapel and Ceremonial Music will retire today (Tuesday August 31).

A renowned organist, Dr Roger Williams joined the University of Aberdeen as a lecturer within the Department of Music in 1978 and was appointed Master of Chapel and Ceremonial Music in 2006.

He leaves behind a thriving music department with more than 200 undergraduate students and is credited with keeping music alive at Aberdeen when the department closed in 1990.

Dr David Smith, Acting Head of Music, said: “When I arrived in 1994, I doubled the complement of musicians on the staff: Roger was the only one left of the former music department which had been closed in 1990.

“I still remember Roger telling me that he was sure that in the fullness of time the department would reopen, but even he must be surprised at the scale of recent developments.

“Back in the 1990s, Roger was music in the University, and he seemed to have an inexhaustible supply of energy and enthusiasm. At this time, someone once told me that there seemed to be more going on at the University of Aberdeen under Roger’s direction than at many other universities with music departments.”

Dr Williams, who lives near Oldmeldrum, worked tirelessly to meet requests for organ recitals, choirs and musical performances and kept academic music going with the creation of a distance-learning certificate in music and as part of the MA programme.

He played a pivotal role in ensuring the smooth transition of Music into the School of Education, following the University's merger with Northern College in 2001.

Music performance under Dr William’s leadership thrived not only to the benefit of the University community but also the City of Aberdeen and more broadly, the north-east of Scotland.

He embarked on a fundraising campaign and took forward various concert series, the funding of the University Symphony Orchestra and twinning exchanges between the University and the Paris Conservatoire.

Dr Williams was also a key figure in the team which oversaw the design and installation of a new Aubertin organ in the 500-year-old King’s College Chapel in 2004 and was awarded an MBE for services to music in June 2009.

Dr Smith added: “One of Roger’s greatest assets - besides his great musicianship, of course – is a wide ranging interest in pretty much all music from plainchant to the most recent contemporary composition.  This enabled him to give students an incredibly rich musical experience, especially when directing university ensembles such as the Chapel Choir, Choral Society and Orchestra.

“I personally have learned a great deal from him over the years, and join a great many others in wishing him an active and musical retirement.”

Dr Williams said he had enjoyed a “wonderful and rewarding” time at the University of Aberdeen.

“My time at the University has been an honour and I have learned so much,” he added.

“I have been fortunate to be involved in some wonderful events including the Queen Mother’s honorary graduation in 1983, two visits from Her Majesty the Queen and the quincentenary celebrations to mark 500 years since the founding of the University.

“It has been a privilege to teach here and the calibre of the students is extremely high. There is a wonderful openness of the University, and particularly the Chapel, which is very welcoming and have been proud to be a part of that.”

Dr William’s time as Master of Chapel and Ceremonial Music at the University will draw to a close with an organ recital tonight (Tuesday August 31) at King’s College Chapel where there will be a collection for victims of the floods in Pakistan.

He intends to continue performing and will use his retirement to further his academic research on the music collections of Scottish castles and country houses.