Occupational therapy under the spotlight in new book
28 July 2010 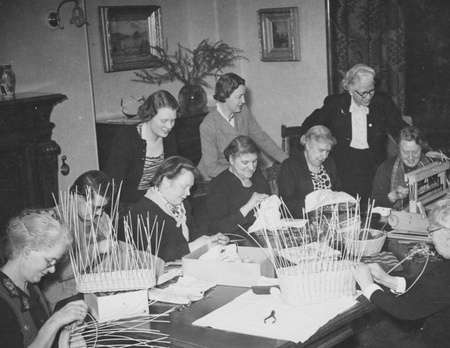 With the growing elderly population and increasing numbers of troops returning home with the scars of conflict, occupational therapy has never been more in demand.

Now a new book from an Aberdeen academic explores the history of the profession and what can be learned from the roots of occupational therapy in the rehabilitation of patients today.

Occupational therapists help those with medical conditions cope with illness or disability in order to enhance their ability to lead as full and as meaningful a life as possible. Dr Paterson trained at the Astley Ainslie Hospital from 1960−1963 and went on to become Principal of the Grampian School of Occupational Therapy, 1976−90, and Director of Occupational Therapy at the Robert Gordon University, Aberdeen, 1990−2002.

“In that time the profession has come a long way – my research shows that occupational therapists in the early days worked closely with enthusiastic holistic doctors concerned about the mental, social and spiritual needs, as well as the physical needs, of patients.

“Initially occupational therapy was based, although not exclusively on craft work, carefully selected and graded to enhance the patient’s physical, psychological and social abilities at a time when patients spent long periods of time in hospital.  Today there is a much greater emphasis on facilitating early discharge and support in the community.

“However, there is a view of the profession simply as getting people out of hospital as quickly as possible. For me, occupational therapy involves much more than this and I hope my research demonstrates that the lessons learned in the early years should not be forgotten.”

Dr Paterson stressed that she was not advocating a return to the days of basket weaving, but that meaningful occupation, including creative activities, relevant to today’s society have an important role to play in enhancing everyone’s health and well-being.

“While it is easy to dismiss the practises of the past and say things have moved on, the need to be creative is basic to everybody and I wanted those coming into the profession today to understand where we were coming from and that even in the early days there was a body of theory that lay behind the therapeutic aspect of creativity,” she added.

“This was recognised by psychiatrists in the days before effective medication and by physicians treating patients who had to spend months or even years in sanatoria to overcome tuberculosis.  It was particularly important during the two world wars, when the need to return injured servicemen to active service or to the civilian workforce was paramount.

“I hope my book will serve as a reminder of the results which can be achieved from the ‘early day’ methods and preserve some of what we learned for future generations.”

Opportunities not Prescriptions: The Development of Occupational Therapy in Scotland 1900−1960 is available from Aberdeen History of Medicine publications.

About the author:Catherine F. Paterson, usually called Irene, trained at the Occupational Therapy Training Centre, Astley Ainslie Hospital, Edinburgh from 1960 to 1963. She had a varied clinical career in psychiatry, spinal injuries and care of the elderly, during which time she served on the council of the Scottish Association of Occupational Therapists and was elected chairman. She was awarded a Churchill Fellowship to visit Australia in 1972. On her return, she trained as a teacher of occupational therapy at the Astley Ainslie and at Jordanhill College of Education, Glasgow. As a King‟s Fund Fellow, she researched the training needs of the remedial professions for two years, before being invited by Grampian Health Board to set up the Grampian School of Occupational Therapy in 1976. The school transferred to the Robert Gordon Institute of Technology (later the Robert Gordon University) in 1990. During her time as Principal / Director of Occupational Therapy, she studied at the University of Aberdeen for a M.Ed. and a Ph.D.