Shark scientist back with tales from the deep
28 July 2010 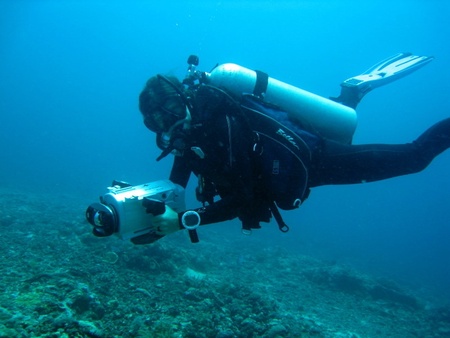 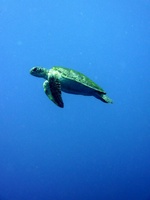 Shark scientist Dr Lauren Smith has spent three months in the Philippines working with conservationists trying to protect a threatened species of shark.

The 27-year-old was a volunteer with the Thresher Shark Research and Conservation Project which is studying the behaviour of the species that are prized for their meat and for their fins which are used in shark fin soup.

There are three types of Thresher Shark species and all are now listed as vulnerable by the International Union for the Conservation of Nature and Natural Resources.

Dr Smith – a University of Aberdeen graduate – was studying Pelagic Thresher Sharks found at Monad Shoal, off Malapascua Island in the Philippines. Sharks swim there to be ‘cleaned’.

“I had an amazing time examining the behaviour of these open ocean predators,” said Dr Smith, who lives in Aberdeen, where she is a senior research scientist researching the shark immune system and who also volunteers her time to the Scottish Shark Tagging Program.

“The sharks pick up parasites such as sea lice during their travels, so they come to “cleaning stations”, which are unique areas of coral reefs where cleaner fish live. These cleaner fish feed on parasites found on the sharks.

“I was involved in the underwater filming of Thresher Sharks and studying the interaction between the sharks and the cleaner fish.

During her time in the Philippines, Dr Smith freedived with the undisputed giant of the shark world – the Whale Shark.

“I travelled down to Donsol a few days after my arrival in the Philippines as this coincided with the presence of whale sharks in the sea around Donsol,” she said. “It was just incredible. The sheer size of these creatures is just humbling and getting eye contact with them was just one of the best experiences of my life!”

She had plenty of other unforgettable encounters.

“I nearly head butted a Manta Ray!” she said. “I was working on the reef and felt a presence beside me. I looked up and my head was practically in the gills of Manta Ray. It was absolutely amazing seeing it just glide gracefully away.

“I was also diving with Pygmy Devil rays (smaller cousin of the Manta) and Grey Reef Sharks.

“I was also lucky enough to travel to the Republic of Palau which is 500 miles east of the Philippines.

“I dived in some of the best sites in the world. Blue Corner, in particular, was just fantastic. Not many things can render me speechless but this did – there were huge shoals of big fish such as Jacks, Giant Trevally and Barracuda and there were amazing colourful reefs with turtles and reef sharks circling constantly.

“I also got a rare sighting of a Great Hammerhead shark at a dive site known as German Channel in Palau.  I will never forget it.”

Dr Smith was awarded her PhD in Marine Biology from the University of Aberdeen in 2009. To discover more about Lauren’s work in the Philippines please visit her blog at: http://www.tagsharks.com/lol-lauren-on-location or her website: http://www.sharkiologist.com/

About the Thresher Shark Research and Conservation Project

The project is owned by Simon Oliver and Dr Alison Beckett and is working towards a number of goals including protecting the cleaning station from coral damage and changing local Filipino fishing laws to stop the fishing of Thresher Sharks. Daily research which is undertaken while diving includes; underwater filming, analysis of coral growth and coverage and cleaning fish interactions.