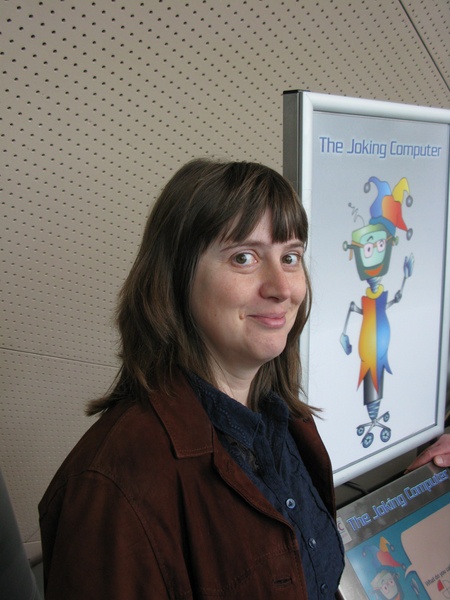 What do you get when you cross humour with science? A joke-generating computer programme, created by Aberdeen scientists to help children develop their language skills, is launched online today (Wednesday July 21).

The software – known as The Joking Computer – has the capacity to build millions of different jokes using a large dictionary of language and simple language rules.

It was originally devised to help children with disabilities such as cerebral palsy build on their language skills.

The technology has since been developed into an interactive exhibit - aimed towards children of all ages and abilities - that is now on show at Aberdeen’s Satrosphere Science Centre and Glasgow Science Centre.

The launch of the online version - www.abdn.ac.uk/jokingcomputer/joker- will now allow people from across the globe to try their hand at building their very own gags.

Dr Judith Masthoff, Head of the University of Aberdeen’s Department of Computing Science, one of a team of scientists who developed the software said: “The aim of The Joking Computer is to help children and adults alike to explore language in a unique and fun way.”

“All the jokes are question-answer puns, like those you get in Christmas crackers. The software allows you to see how the joke-making process works.    Or you can choose roughly what sort of joke you want, and have the computer build a new one.

“The software was originally developed by scientists from the Universities of Aberdeen, Dundee and Edinburgh to provide children with cerebral palsy, or similar impairments, with a device to help them advance their language abilities.”

“The technology has since been developed further into an interactive exhibit which is aimed towards the general public – and specifically towards young audiences – allowing them to investigate the different language rules involved in the development of humour.”

“The online tool will now allow people from across the world to try out the software and generate their very own jokes.”

Some of the jokes created by the Joking Computer include:

Scientists at the University also hope The Joking Computer will help further understanding of what computing technology can achieve.

Dr Masthoff added: “The Joking Computer website not only allows people to use the software, it also provides background information on this and many of the other research projects being conducted at the University in the field of computing technology.”

“These projects include the development of a device which enables children with limited or no speech to communicate the story of what they did at school that day, and artificial intelligence technology which can provide road maintenance teams with up-to-date and accurate information on which roads need to be gritted and when.”

“The hope is that the website will showcase the hugely positive impact computing technology can have on all of our lives, and potentially encourage young people to consider an academic or occupational career in the subject in the future.”

Visit The Joking Computer at: www.abdn.ac.uk/jokingcomputer/

Background on the research project:

The original project to create an interactive computer program so that young children — in particular those with disabilities such as cerebral palsy - could play with words and phrases, to develop their language skills was called STANDUP (System To Augment Non-speakers' Dialogue Using Puns).

Background on the exhibit:

The Joking Computerexhibit and website were developed by computing scientists from the University of Aberdeen in partnership with Glasgow Science Centre with the aim of teaching young people about what computing technology can achieve.

£105K of funding for public engagement was received from the Engineering and Physical Sciences Research Council (EPSRC) to create the exhibit.