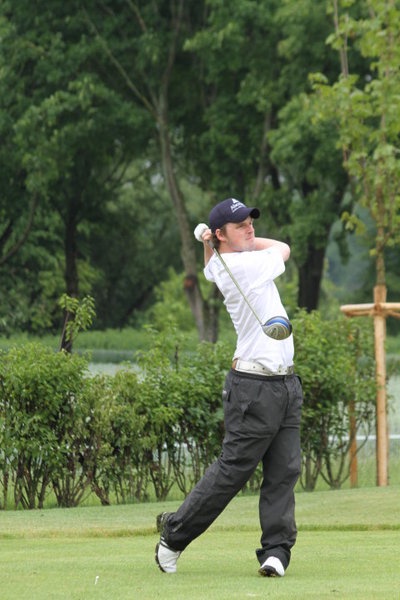 A team of four University of Aberdeen golfers travelled to Munich last week to face teams from South Africa, USA Australia and Europe for the 2010 World Students Matchplay.

Blair Mackay, Douglas Maxwell, Neil Gordon and Cameron Hay were given a tough test at Wittelsbacher Golf Course, a possible Ryder cup course, made even more difficult by the addition of rain and wind.

The team was drawn in a group with Vienna, Tasmania and Erlinger and got off to a great start, winning their group by a very convincing 16 strokes.

Douglas Maxwell had the 4th lowest individual gross of the day, narrowly missing out on a medal, and Cameron Hay had a very solid round and tied 5th in what will be his last appearance for Aberdeen for one year as he heads off to Clemson South Carolina in 2010 on an exchange.

Neil Gordon, who was club captain 2009/10 finishing within the top 30 to make up the three counting scores, with team captain Blair Mackay narrowly missing out.

The team was then drawn to play Pretoria University, in the semi-finals. Pretoria went on to win 3-1 and the team then played Warick in the 3rd place playoff but lost on extra holes to finish fourth.

Blair said: “Overall, the competition was great fun, we met many new friends from across the globe, proudly represented the University of Aberdeen abroad, and the team performed well.

“We are now hoping that next year’s team can go all the way.”

There was a consolation for Douglas, whose strong performances in the tournament and 100 per cent record for the golf team in 2010 earned him this year’s award for ‘Aberdeen’s most valuable player’.