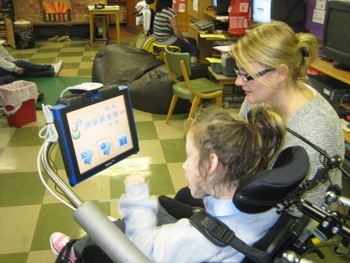 Capability Scotland’s Corseford School scooped a national award at this year’s Times Education Awards for their work with academics from the Universities of Aberdeen and Dundee.

Competing against schools from all over the UK, the school won the category of Outstanding ICT Learning Initiative of the Year for their involvement in the groundbreaking technology project known as How was school today?.

The How was school today? software, developed by scientists from the two universities, uses a combination of technologies to enable children with disabilities such as cerebral palsy and learning difficulties to have conversations in a faster, more interactive way.

The technology, the first of its kind in the world, uses sensors to track the pupils as they move around the school - gathering data and information that pupils can then edit into a story describing what they did at school.

Pupils can then pass this onto their parents or carer when they return home at the end of the day, giving them the opportunity to share information in a more natural way.

The Times Educational Supplement panel of judges thought the project to be an impressive winner.

They said: “The technology they've developed means that children with severe learning difficulties can now communicate with their parents just as well as any others. It's a really good use of technology and it's been life changing for the youngsters who have been involved."

Sue Williams, headteacher at Corseford said:  “We are absolutely delighted to have won this prestigious award.  The technology really has been life-changing for our pupils. It has allowed them to have much greater interactive narration, enabling them to easily talk about their school day and to quickly answer questions much more independently”.

Dr Annalu Waller from the University of Dundee’s School of Computing who helped to develop the technology said:  “I am delighted that Corseford has been recognised in this way as without the commitment and vision of staff, pupils and parents, we would not have succeeded in developing new technology that truly meets the needs of the children and actually works in the school environment.”

Rolf Black from the University of Dundee’s School of Computing said: “It is always a fantastic experience working with the children at Corseford School and it is great seeing their work rewarded in this way.”

Fiona said: “Nicole had a wonderful time. It was the first time she had been to London and she enjoyed every minute of it, from the taxi tour around town to collecting our award onstage at the Grosvenor Hotel.”

The How Was School Today? project received additional funding of £285,000 from the Engineering and Physical Sciences Research Council earlier this year to develop the devices further.

The Aberdeen and Dundee University researchers are aiming to support children with a wider range of difficulties through more compact forms of the equipment, for example using mobile phone technology.

How was School Today?

A child using How was school today? can create a story describing what they did

during their day, and then use the technology to tell it to a parent or guardian.

and records where they are going within their school day.

the system who the child has met and what activity they have been involved in.

A recording device is also incorporated in the system, which allows people who

which have taken place within the youngster’s day.

generation techniques which summarise events during the day.

Natural language generation (NLG) is used to convert the sensor data into English,

e.g. if the sensor data places the child in the hall at 1.30pm, the system would

generate a sentence such as “After lunch I went to the hall”. NLG also allows the

system to generate appropriate comments, e.g. if the child came into contact with a

person called Anne who swiped her card to register her presence, the system might

generate: “Anne was there.” If the child then chooses to add a positive comment by

pressing a smiley face, the system would automatically generate “she is nice”,

because it knows that Anne is female.

The long term aim of How was school today? will be to assess how the technology

Corseford School in Kilbarchan provides day and residential education, along with

respite care, for children between 5 and 18 with severe and complex support needs

Capability Scotland campaigns with, and provides services to, disabled children and

adults across Scotland, supporting them to achieve equality and have choice and

control in their lives.