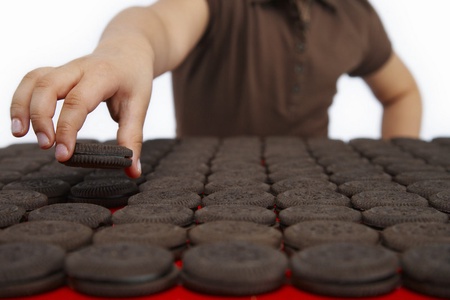 Workplace stress and why it can have you reaching for chocolate or the biscuit tin will be studied by researchers at the University of Aberdeen.

How and why food can be addictive will also be explored by Aberdeen scientists as part of a major new European study spanning five years which will try to find out some of the reasons why people eat too much and run the risk of obesity.

NeuroFAST- Neurobiology of Food Intake, Addiction and Stress - is the name of the €6M EU funded research project which brings together internationally recognised experts from areas such as psychology, genetics, epidemiology, nutrition and endocrinology based in seven different countries*.

The University of Aberdeen Rowett Institute of Nutrition and Health has been awarded almost €1M to deliver three elements of NeuroFAST.

One will look at the effect of workplace stress on eating behaviour, another will explore whether sweet tastes and rich textures can cause food addiction, and the third will see Aberdeen scientists pulling together findings from all the European researchers and then sharing the information with governments, food and drink producers, health professionals, industry and other stakeholders.

Professor Julian Mercer, head of obesity research at the University of Aberdeen Rowett Institute of Nutrition and Health, said: “The obesity epidemic is driven by our over consumption of food.  NeuroFAST is an extremely prestigious project which aims to provide answers to what actually causes people to eat too much.

“There are a number of issues that need to be looked at, including work culture and its effect on food consumption as well as the different attributes of food that make it hard to restrict your intake.

“Ideally if we had the information it could allow producers to design food that is still palatable but doesn’t have the properties that could make you over consume. Imagine a bar of chocolate that was just as rewarding to eat but which didn’t make you feel you have to have the whole block.”

Researchers plan to recruit 450 people from Aberdeen and Aberdeenshire onto the workplace stress and eating study – a third will be shift workers who may have unusual eating patterns.

Dr Alexandra Johnstone, a nutrition scientist at the University of Aberdeen Rowett Institute of Nutrition and Health, will lead this part of the project. She said: “We hope to recruit volunteers from three large workplaces onto our study which will examine the effect of workplace stress on eating behaviour.

“We will be looking out for people who reach for a snack when they feel stressed and workers who don’t bother with food when they feel under pressure. We will also explore any differences between men and women.

“Some of our volunteers will be shift workers and we will be examining whether it is tiredness rather than hunger that causes some of them to crave more food in the middle of the night. Or maybe it is a lack of facilities that sees them head for the vending machine.

“One of the workplaces that we select will have achieved a Healthy Working Lives Award, which promotes good health in the work place, and we will be checking out whether this makes a difference.

“We will also launch a separate workplace study to see if a web based tool which involves people inputting data about their diet, sleeping patterns and how they feel, can make a difference to health, eating behaviour and tackling obesity.”

Professor Mercer’s part of the study will investigate the addictive properties of food, and eating behaviour. He said: “Evidence already exists that rats can become dependent on sucrose. We will build on this by using a sugar solution that is similar to a soft drink to look at how dependence develops and how this manifests itself in any behavioural changes.

“Novel foodstuffs will be specially manufactured by a food company partner and will allow us to study how sweet taste and rich food textures contribute to food addiction, and whether we can counter this.”

Professor Margaret Gill, Chief Scientific Advisor, Rural Affairs and Environment for the Scottish Government, added: “I am delighted to see the success of the Rowett in winning this funding from Europe. The Rowett has a long tradition of excellence in nutrition associated with real problems. The application of its expertise to this modern issue carries on this tradition.”

Professor Mercer and Dr Sue Bird, Knowledge Exchange Manager at the Rowett, will work on the dissemination of NeuroFAST.

Dr Bird said: “NeuroFAST is an important study but if it is to have any impact on tackling the obesity problem it is key that the findings are shared with all the appropriate stakeholders. We have been working on how best to engage at the science-policy interface for our research funded by the Scottish Government and we look forward to extending this experience across Europe.”

The University of Aberdeen Rowett Institute of Nutrition and Health, together with the Moredun Research Institute, Scottish Crop Research Institute, Scottish Agricultural College and the Macaulay Institute is one of the Scottish Government's Main Research Providers (MRPs). The Scottish Government provides total funding of around £60 million per year to the MRPs in support of four programmes of strategic research. For more information visit www.abdn.ac.uk/rowett/