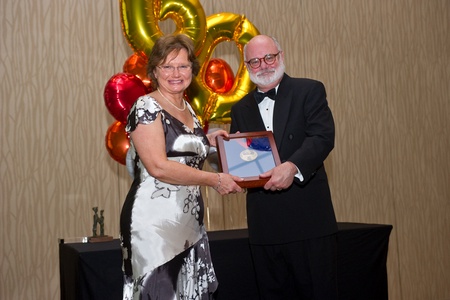 An Aberdeen kidney disease expert who has spent 20 years researching the condition which affects millions of people across the UK has been recognised with a top international honour.

Professor Alison Macleod has been presented with an International Distinguished Medal - launched by the National Kidney Foundation of America to recognise those who have made significant contributions to the field of kidney disease and who have extended the goals of the Foundation.

Just four Medals are bestowed each year on researchers, clinicians and volunteers who work in organisations similar to the Foundation.

Professor Macleod, whose involvement with the Foundation has included studying research papers from around the world to answer questions on best ways of managing the disease, was the only recipient from the UK.

Professor Macleod, who leads the Applied Renal Research Collaboration at the University of Aberdeen and is an Honorary Consultant Physician and Nephrologist with NHS Grampian, said: “I was really surprised and absolutely delighted when I heard I was to receive the International Distinguished Medal from the National Kidney Foundation. I believe it is the first time anyone from Scotland has received it.”

Professor Macleod work includes researching how and why acute and chronic kidney disease occurs in different groups of people. She also carries out major reviews of all the different data that exists into the condition to help inform guidelines for kidney disease care.

The Professor has advised various key organisations on the disease and is an active member of the Kidney Disease: Improving Global Outcomes group. While Clinical Director of the Renal Service for Grampian, she also instigated a dedicated transport service for haemodialysis patients.

Professor Macleod received the Medal at a special event in Florida.

·         The kidneys are a pair of organs in the body that filter and expel waste. Chronic kidney disease affects about 10% of the population. Two of the main causes for the disease which slowly attacks the kidneys are diabetes and high blood pressure. Early detection and treatment can often prevent the condition from getting worse. If it progresses, it can cause kidney failure which requires dialysis or a transplant. Acute kidney disease is a rapid loss of kidney function which may be prompted by another disorder. It can be reversible.

Professor Alison Macleod is available for interviews and photographs. A photo is also available of Professor Macleod receiving her Medal. Please contact Jennifer Phillips to arrange on 01224 273174.