Special Collections Centre to benefit from new funding
28 May 2010 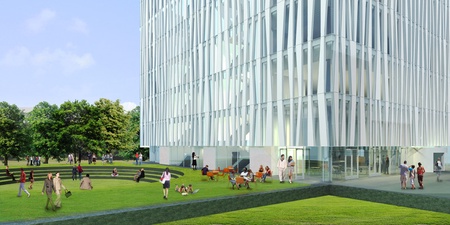 A grant of £45,000 has been given to the University of Aberdeen to allow people to listen to recorded sound material from the institution’s unique collections.

Biffaward has made the grant towards the construction of a listening room which will be an important addition to the University’s new Library, due to be completed in September 2011.

Based within the Special Collections Centre in the new £57 million Library, the listening room will be equipped to provide a dedicated space for all users, including members of the public, to enjoy the University’s collections of historically significant recorded sound material.

The listening room will allow invaluable historical recordings to be enjoyed, which detail the history of northern Scotland together with developments in medicine, psychology, education, law and music, set in a wider educational and social context. In particular, the collections include significant holdings of Scottish traditional music and balladry and over 1,000 hours of oral history recordings, such as the ‘Lives in the Oil Industry’ archive (featuring extensive interviews conveying the experiences of those who played a significant role in the energy business) as well as the recollections of distinguished academics and prominent individuals from the communities of northern Scotland.

Biffaward is a multi-million pound environment fund managed by the Royal Society of Wildlife Trusts (RSWT), which utilises landfill tax credits donated by Biffa Waste Services. Cath Hare, Assistant Programme Manager of Biffaward said: “The University of Aberdeen has one of the most significant collections of books and archives which bring over 500 years of Scottish history to life. With the help of this Biffaward grant, visitors will be able to share in the wonderful literary and historic treasures which the University of Aberdeen has in its possession.

“By enhancing access through the listening room, people of all ages and backgrounds will be able to learn from and enjoy many of the University’s unique recorded sound collections.”

Professor Christopher Gane, Vice Principal for Culture and Communities, expressed the University’s delight at the funding award.  He said: "This is wonderful news for the University of Aberdeen and for all our communities we serve. The listening room will allow people to listen to recorded sound material, in semi-isolation, from some of the University’s priceless collections, from significant music collections to invaluable historical recordings.

“There is no other facility in the area which enables all users of the library to learn about the history of their region through the format of recorded sound, and so the listening room within the Special Collections Centre will be a unique resource for the enjoyment of the local community.

“From autumn 2011, our new library will bring recognition to Aberdeen, the north-east, and Scotland, as the home of treasures of great significance, attracting students, scholars and visitors from across the world.”

The listening room will play a vital role in opening up the recorded collections to as wide a range of audiences as possible. It will support significant music collections, with particular strength in the area of Scottish traditional works and balladry. These include examples of the works of James Scott Skinner (1843-1927), a key figure in the field who took the art of Scottish fiddle music to new heights through his performances and compositions.

The funding announcement comes in the week that the North Atlantic Fiddle Convention, organised by the University of Aberdeen’s Elphinstone Institute, in partnership with Scottish Culture and Traditions, is launched (Saturday, May 29).

NAFCo is one of the world’s most exciting traditional music and dance festivals and is a landmark cultural event for the city of Aberdeen and surrounding area and will see some of the world’s finest traditional musicians gather in the north-east and will consist of a five-day festival featuring concerts, ceilidhs, solo recitals, workshops, demonstrations, free performances, ‘market-place’ events, sessions in pubs and at the Festival and Family Club at the Lemon Tree.

The University’s collections are a unique record of the development of the region, of Scotland, and society in general.

Computer-generated images of the new library are available from the Communications Office of the University of Aberdeen.

Tickets for all NAFCo events are available from Aberdeen Box Office by visiting http://www.boxofficeaberdeen.com/ or by calling 01224 641122. For further information see www.abdn.ac.uk/nafco/ or email nafco@abdn.ac.uk  or telephone 01224 272996.

In 1997 Biffa Waste Services agreed to donate landfill tax credits to the Royal Society of Wildlife Trusts (RSWT) to administer under the fund name Biffaward. Grants made from the fund currently amount to over £90 million, supporting many worthwhile projects.

Biffa Limited is one of the largest single suppliers of waste management services in the UK. It collects, treats, recovers and disposes of municipal, commercial and industrial waste nationwide.

The landfill tax came into operation in 1996.  Its purpose is to reflect the impact of landfill on the environment and also to help achieve the targets for more sustainable waste management.  The tax, levied on the tonnage of all material disposed of in landfill sites and collected by Biffa on behalf of HM Revenue and Customs, aims to encourage recycling and reduce waste by raising the cost of disposal.