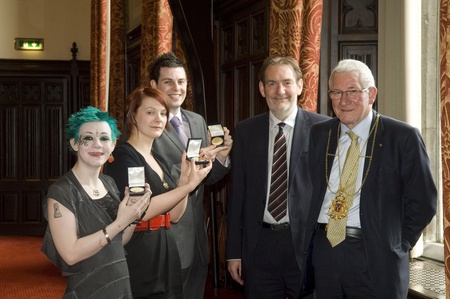 A chronic pain sufferer, who has overcome ongoing medical difficulties to succeed in her studies, is one of three University of Aberdeen students to be honoured by the institution today (Thursday May 20).

Alicia Mason, Ryan Whelan and Rachel Smillie are this year’s winners of the Aberdeen Quincentenary Prize.

The students will each be presented with a £1000 cash prize and medal in honour of their achievements by the Lord Provost of Aberdeen, Peter Stephen, at a ceremony held at the Aberdeen City Council Town House this afternoon.

Professor Ian Diamond, Principal and Vice-Chancellor of the University of Aberdeen will be amongst those attending the ceremony.

Twenty-one-year-old Alicia Mason’s strong commitment to learning in the face of the chronic pain which she has suffered from since her teenage years, secured her the Quincentenary Prize.

Now in her third year of a Computing Science degree, her illness resulted in her retaking her second year, as whilst she had passed all her courses, she felt she had not learned all that she hoped to.

Alicia, who is originally from Bristol, has also played a major role in re-establishing the University’s student Computer Society and has been involved in various research projects during her time at the University.

She is currently working with the University of Aberdeen Rowett Institute of Nutrition and Health to develop a ‘super computer’ which can process large amounts of molecular biology data.

Twenty-two-year-old Ryan Whelan from Aberdeen is studying for a Diploma in Legal Practice at the University.

He secured the Quincentenary Prize for his dedication to enthusing others about the subject of law.

As part of his role as President of the institution’s Law Society last year, Ryan introduced a highly successful series of events in which distinguished alumni were invited to address the law student body.

Ryan – who was head boy at his former school St Machar Academy – also acted as Senior Counsel for the University of Aberdeen team in the recent Granite City Moot, which saw them take victory over their rivals Robert Gordon University.

Final year English student Rachel Smillie has been honoured with the Quincentenary Prize in recognition of her consistently outstanding academic achievements.

The 23-year-old has balanced a part time job as a restaurant supervisor and her position as copy editor on the student newspaper – the Gaudie – alongside her studies.

She was one of a team responsible for re-founding the student English Society, which recently performed a play as part of Word - the University’s annual Writers Festival – entitled Much ado about not very much.  The play provided a modern take on literary classics such as Shakespeare’s Romeo and Juliet, and James Joyce’s Ulysses.

Rachel – who will graduate from the University in July - is originally from Essex, but her parents now live in Aboyne.

“Today’s ceremony honours these three prizewinners whose high educational performance combined with a real dedication to the wider community make them strong examples of the high calibre of exceptional graduates being produced by the University.”

To become eligible for the Quincentenary Prize, students are nominated by their Heads of Schools within the University.

Two prizes are awarded annually to students studying in the Humanities including Arts, Social Sciences, Divinity, Education and Law; in Sciences, including Engineering and Medicine; and a third prize which is awarded at the discretion of the University.