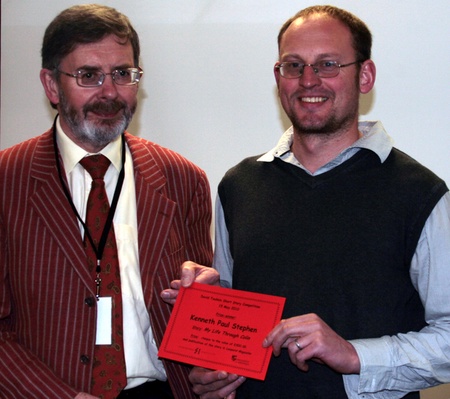 An aspiring Perthshire author has taken a major step forward scooping the 2010 Toulmin Prize for his short story My Life Through Colin.

Kenneth Paul Stephen’s tale of a young wheelchair user who lives his life through the experiences of his friend ‘Gav’ was announced as the winning entry at the Word Festival in Aberdeen.

In addition to the cash prize, Kenneth’s story will be published in the Leopard magazine and subsequently featured on the website of the Scots Language Centre.

He was presented with the Toulmin Prize at a special event at Word – the University of Aberdeen Writers Festival – on Saturday (May 15).

The Festival is a three-day mix of readings, debate and discussion and celebrated its 10th anniversary with a host of big names including actress and author Pauline McLynn, wildlife cameraman and presenter Simon King and former BBC war correspondent and ex-independent MP Martin Bell.

Kenneth, 37, a freelance journalist from Needless Road, Craigie, said he was delighted to receive recognition for his move into the world of fiction.

The former Forfar Academy pupil said: “This is the first competition of this kind that I’ve won and I’m delighted My Life Through Colin was selected for the Toulmin Prize.

“It is wonderful to win the competition in this important year for the Word Festival as it celebrates its 10th anniversary.”

Dr Ian Russell, Director of the Elphinstone Institute, said: "We are proud to have been able to honour John and his work in this way and delighted to see Kenneth take the 2010 Toulmin Prize. We received some very strong entries but Kenneth’s tale really stood out and was a very worthy winner."