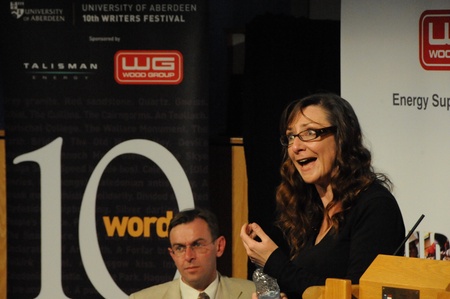 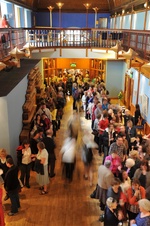 The Word Festival enters day two today (Saturday May 15) with more big names in the frame and the world premiere of Scottish Opera’s new season of Five:15 short operas.

The unprecedented political developments will come under the spotlight at 11.30am with former BBC war correspondent and ex-independent MP Martin Bell sharing his views on recent developments and discussing his most recent book, A Very British Revolution: The Expenses Scandal and How to Save Our Democracy.

From the big question of the day, Word will move to an issue which has been central to our understanding of the world for more than a century – what is the Theory of Relativity and why does it matter?

In E=mc2 at 1pm, Jeff Forshaw will tackle the meaning of one of science’s most  famous equations, the subject of his ground breaking book written with Brian Cox, and will talk through Einstein’s theory and how it relates to the world around us.

Injecting humour into proceedings, there will be a sneak peek into life on Craggy Island with Father Ted actress and author Pauline McLynn, who shot to fame playing Mrs Doyle in the cult series and can currently be seen on our screens as Libby in Shameless.

With numerous stage, film and TV credits under her belt, she is also a successful author having penned seven novels including Missing You Already and a trilogy about Irish private eye Leo Street. She will provide an entertaining account of her life and work at 2pm.

Other highlights of the day include Aminatta Forna, author of The Devil that Danced on the Water, Ancestor Stones and The Memory of Love, and Philip Kerr, described as ‘the thinking reader’s thriller writer’ who has penned Dead Meat and The Second Angel.

At 5pm Word-goers have an opportunity to be among the first to get their hands on the latest work by one of the UK’s brightest young authors.

Scarlett Thomas, who wrote the international bestseller The End of Mr. Y, will release her latest work Our Tragic Universe, on May 20 – she will read from the book and festival-goers will have an opportunity to get their copy ahead of general issue.

She will be followed by Benedict Allen – a genuine adventurer and explorer who has travelled to some of the planet’s most inhospitable locations – filmed without the aid of a camera crew. He will talk about his incredible journeys which produced the BBC series The Skeleton Coast, Travellers’ Century, and Unbreakable and the book Into the Abyss.

The curtain will come down on events at King’s College with the world premiere of Scottish Opera’s new season of Five:15, while at the Lemon Tree one of Scotland’s funniest women, Karen Dunbar, will entertain.

It will be the first time opera has featured at Word and each of the five short operas has been written and created in Scotland – two at the University of Aberdeen.

The audience will be taken through stories ranging from a zen parable to the chilling tale of an ill-fated Polar expedition in the scenic setting of the University.

Word artistic director, Alan Spence, said the festival would build on the success of the first day with the most diverse range of events ever staged.

He said: “We got off to a great start on Friday with sold-out events and a great atmosphere around campus.

“Today’s programme is just as rich and varied, and there are still tickets available. So even if you’ve not booked yet, there is still time.”