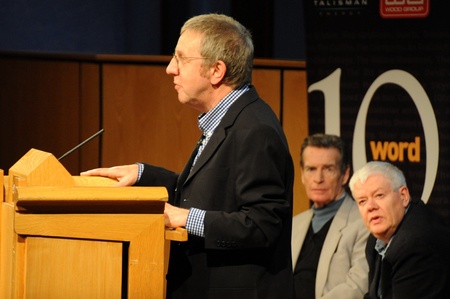 One of the highlights of Scotland’s cultural calendar will get underway today (May 14) as the Word Festival celebrates its 10th birthday.

Word – the University of Aberdeen’s Writers Festival –will see more than 50 authors, thinkers and commentators from across the globe come to the Granite City for an energetic, three-day mix of readings, discussions, film screenings and exhibitions.

David Peace makes his first visit to the Festival after his success last year with the film adaptation of The Damned United and the powerful TV dramatisation of his Red Riding quartet, as does ‘the thinking reader’s thriller writer’ Philip Kerr.

For the first time Word, which is expected to attract more than 10,000 visitors to Aberdeen, will also include opera with the launch of Scottish Opera’s successful Five:15 series of short operas.

But for the opening event of 2010, the Festival will return to its roots with a reprisal of the very first Word event featuring great prose from Ireland and Scotland with Bernard MacLaverty, William McIlvanney, and Word artistic director Alan Spence.

They will be followed by science writer and libel law campaigner Simon Singh, wildlife photographer and cameraman Simon King, who will discuss his recent Shetland Diaries series, and Spanish writer Lucia Etxebarria whose first book was a colourful biography of Kurt Cobain and Courtney Love.

Continuing the celebratory theme into the evening, renowned West End actress Linda Marlow will appear at the Lemon Tree and the venue will stage a Canongate Irregular Club Night which will bring together writers, a live band and DJ for a noir-themed late-night session.

The Festival, sponsored by Talisman Energy and Wood Group, has come a long way since its humble beginnings when Professor Spence was given £1,000 by the University, to bring in writers who would give weekly readings.

As Word has grown it has also increased the provision for young book lovers with separate Schools’ and Children’s Festivals, sponsored by Marathon Oil.

The two-day Children’s Festival will get underway on Saturday (May 15) with a host of free events ranging from sessions with famous authors to a survival workshop and magic show.

The School’s festival ran from Tuesday to Thursday (May 11-13) when more than 700 pupils from across Aberdeen city and shire descended on the University.

Professor Spence said Word 10 was expected to be the largest and most diverse festival yet.

He said: “Ticket sales for Word 10 have been great with a record number sold in the first week following the launch of our exciting programme.

“Word is an annual literary festival of international proportions which has held its place as one of the highlights of Scotland’s cultural calendar for a decade.

“During that time the festival has grown year on year, not only in terms of the number of events offered but in the diversity of the programme.

“Word 10 is the most varied festival to date and from an insight into the election result and tales of epic adventure to readings from some of the hottest authors producing work today, it has something to offer all tastes and interests.

“Despite the current economic climate we’ve managed to keep ticket prices down with the help of our sponsors and some events are still free, so it's affordable.

“Word 10 promises to be a energetic and exciting mix of events and are delighted to be able to welcome so many big names – and of course festival-goers - to Aberdeen to join our birthday celebrations.”

Tickets are still available for events across the weekend including Scarlett Thomas, author the bestselling End of Mr Y, David Peace, who wrote the Red Riding trilogy and The Damned United, explorer Benedict Allen and for science writer and libel campaigner Simon Singh.

They can be obtained in person from the Word Festival Box Office, King’s College Centre, Old Aberdeen, open from 10am to 6pm from Friday May 14 to Sunday May 16.