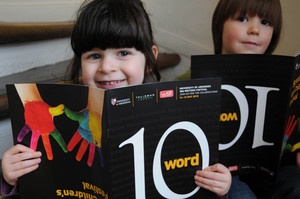 A new book written by children in Aberdeen will be launched today (May 11) at the Word Schools' Festival.

Award winning children’s author John Fardell will be at the University of Aberdeen with the Lord Provost of Aberdeen Peter Stephen, to unveil the latest work produced by the Reading Bus.

The event will form part of the three-day Marathon Oil Schools’ Festival (May 11-13), a prelude to the main Word Festival, which will see more than 730 pupils from across Aberdeen city and shire descend on the campus for a host of free events designed to fire young imaginations.

They will officially launch Wishes and Legends, the latest publication by the Reading Bus which has been sponsored by Aberdeen based oil and gas exploration company TAQA Bratani.

The book has been written and illustrated by eight different schools in the St Machar community and more than 200 pupils worked with authors, storytellers and artists to create their own original stories all based on wish makers and wish granters.

Fardell, who wrote the forward to the book and conducted workshops to inspire the young writers, and the Lord Provost will also be given a tour of the Reading Bus where they will hear about the impact it has had on the lives of those who use the service.

The Reading Bus is the focal point of a highly successful initiative to promote literacy, initially in the St Machar area of Aberdeen, and since its launch in 2006 more than 32,000 learners and a wide variety of visiting contributors have been on board.

It will be at Word 10 for both the Schools’ Festival and the Children’s Festival, running from May 15 to 16.

Fardell and the Lord Provost will board the bus for a short presentation from Woodside School pupils on a Day in the Life of the Reading Bus, which will give a flavour of the varied activities that take place on board including storytelling, puppetry, film animation and broadcasting.

After alighting from the bus, they will be guided on a ‘journey’ through Old Aberdeen calling at various ‘bus stops’ along the way where they will meet pupils, teachers and specialist educational workers.

The ‘stops’, sponsored by the Heritage Lottery,will be divided by theme and include:

·   Rock Raptor: Pupils from Kittybrewster School will share their response to the Rock Raptor, a monster who loves to munch rocks around Old Aberdeen created for a Doric book they produced.

·   Aul Aiberdeen: pupils from Cornhill School will journey back in time to explore the rich history of Old Aberdeen’s landmarks through poetry, storytelling and art.

·   Film Animation:  pupils from Sunnybank School will demonstrate the skills they used to create the animated film, Gibberie Wallie and pupils from St Machar Academy will show A Bird’s Eye View of Tillydrone that was created in partnership with Station House Media Unit

·   The Woodcarvers of Old Aberdeen: woodcarvings, storytelling, poetry and writing by the pupils of Woodside School inspired by the rich heritage and culture of the woodcarvings in Kings College Chapel.

·   Seaton Potters: pupils from Seaton School will show the two stunning pieces of modern Seaton Pottery created by the pupils in partnership with Miss Nancy Fuller, a professional ceramicist.

The tour will conclude with a recital of the song The Woodcarvers of King’s College Chapel from pupils of Woodside School and a performance by Tarland fiddler Paul Anderson.

The Lord Provost said: "The Reading Bus has proven to be a fantastic initiative which has inspired children to explore the world of literature, try their hand at writing and learn more about the North-east culture. The Reading Bus publications have been extremely popular so far, and I am quite sure that Wishes and Legends will prove just as popular, if not more so."

John Fardell said:  “The Word festival and its dedicated Schools’ and Children’s events have an excellent reputation, as does the Reading Bus, which is doing fantastic work getting children in Aberdeen into reading, writing, drawing and using their imaginations.

“I’m honoured and delighted to be unveiling this brilliant book, and I'm looking forward to hearing first hand from the young people about all the fabulous creative work they've put into it.”

Professor Chris Gane, Head of the College of Arts and Social Sciences, University of Aberdeen, said:

“For Word 10 we will be welcoming more than 730 pupils from schools across Aberdeen city and shire for the Schools’ Festival with hundreds more expected for the Children’s Festival.

“The Schools’ and Children’s Festivals are an integral part of Word and have grown year on year, helping to inspire young minds through a wide range fun and informative sessions.

“We have enjoyed excellent support from the Reading Bus, which does a fantastic job in inspiring young people in a wide range of educational activities, and we are delighted to welcome John Fardell and the Lord Provost to see the great work going on here in Aberdeen.”