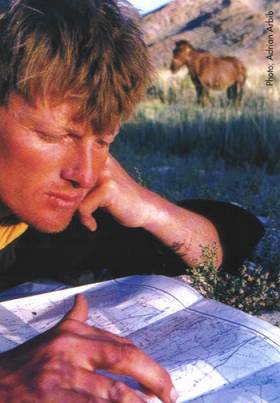 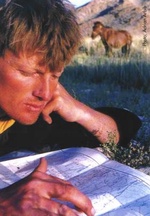 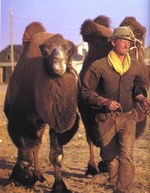 There can be few former students of the University of Aberdeen with a more interesting tale to tell than that of explorer Benedict Allen.

He has crossed deserts, rainforests and travelled solo to some of most remote and inhospitable areas of the world, narrowly escaping death on six occasions.

On Saturday May 15 he will return to the University to share the tales of his adventures with a special event at Word – the University of Aberdeen Writers Festival.

Dubbed “television’s most fearless man” by the Radio Times, Allen is one of Britain’s leading adventurers - a rough and ready explorer who travels the world forsaking creature comforts and the company of a TV crew.

It will be a welcome return to the University of Aberdeen for Allen, who studied Ecology at the Institute during the early 1980s. Indeed, it was during his time in the Granite City that he developed an idea which was to become the cornerstone for all his future ventures.

“I decided that instead of raising money through sponsorship back home, I would immerse myself among indigenous people and hope for their assistance – after all, they saw many apparently hostile environments, such as the Amazon and Borneo, as a home rather than threat.

“The philosophy offered another bonus: by travelling "light” I could be quick to take advantage of any opportunities and progress with speed - like the Alpine approach of mountaineer -  and the crossing of so much formidably remote forest might actually become possible. “

In 1983 he, and a group of locals, succeeded in that objective and successfully made the crossing - a precarious 600 mile dash through the forest by foot and canoe.

The journey was not without incident and when he finally emerged from the forest he was alone and had two types of malaria, having already been attacked by gold miners, fled and eventually eaten his dog to survive.

But far from putting him off adventure, Allan followed up the trip with his first book Mad White Giant, and he took the decision to submerge himself among some of the remotest people on earth to help understand the forest that had so nearly killed him.

A string of expeditions followed, with the Iban of Borneo, Mentawai of Sumatra - where Allen memorably had to stitch up his chest with his boot-mending kit - and various peoples in New Guinea and the Gibson Desert, Allen arriving in Australia on one occasion by seafaring canoe, having become marooned while crossing the treacherous Torres Strait.

With training from the Matses “Indians” he went on to cross the whole of the Amazon Basin, a 3,500 mile journey of almost eight months; during this he broke three ribs falling off a horse and on Columbia’s Putumayo River was shot at by assassins belonging to the drug baron Pablo Escobar.

As a result of the expedition, the BBC asked Allen to take a video camera on his adventures. His first programme, Raiders of the Lost Lake, gained the highest viewing figures in the history of the Video Diary strand.

It was followed by The Skeleton Coast series, the story of his arduous three and a half month walk with reluctant camels through the Namib Desert, Edge of Blue Heaven, about his five month trek through Mongolia, culminating in a six week lone walk across the entire Gobi Desert with a string of baggage camels, and Last of the Medicine Men, in which he investigated healers, shamans and so-called “witchdoctors” around the world.

In 2001, Allen completed a 1000 kilometre trek through the Russian Arctic with a dog team in the “worst winter in living memory” which became his fifth TV series for the BBC and inspired his most recent book Into the Abyss, which tells the full story of the Icedog’s exhibition and his quest to understand what it is that enables any of us to survive hardship.

He will share some of the highlights of his adventures at the Word Festival in the Art’s Lecture Theatre, King’s College, University of Aberdeen on Saturday May 15 and said he was looking forward to his return to the Granite City.

“I studied for an MSc in Ecology in 1981-82 and loved the University, especially the winter, with brilliant blues skies, and walking the sea front. By then I was desperate to become an explorer, and covered my student walls with maps; it was a wonderful preparation time for my great launch out into the Amazon jungles.

“I have been back to Aberdeen from time-to-time, but always am left pining for more. There’s something about the feel of the city and surrounds – the coastline, the air, and even the Doric tongue - that has always stayed with me.”

Benedict Allen will be one of the highlights of this year’s Word festival, which runs from May 14 to 16 and also features wildlife filmmaker Simon King and Father Ted actress and author Pauline McLynn.

Allen will get underway at 6.30pm and tickets are £5 or £3 concessions. To book tickets for Benedict Allen and all other Word events visit www.abdn.ac.uk/word/programmeor contact Aberdeen Box Office on 01224 641122.