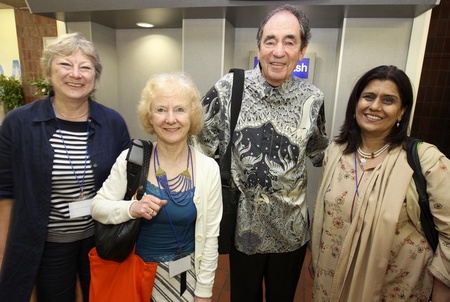 A leading expert in international development, now based at the University of Aberdeen, last week addressed a major conference in South Africa.

Dr Hilary Homans, Director of the University’s new Centre for Sustainable International Development, shared the vision and strategy of the new Centre and discussed the role of universities in achieving the Millennium Development Goals. The audience was a large gathering of vice-chancellors and other senior educationalists and researchers at the 2010 conference of the Association of Commonwealth Universities in Cape Town.

Other speakers included Justice Albie Sachs, known internationally for his writing and human rights work on South Africa’s Constitutional Court, to which he was appointed by President Nelson Mandela in 1994 and retired last October. Justice Sachs’ book published last year, The strange alchemy of life and law, has been widely praised.

Commenting on the considerable interest her work received at the conference Dr Homans said: “The delegates were extremely keen to hear about our vision and research here at Aberdeen, including our work on environmental health, IMMPACT and my own work in Bangladesh and Nepal. At least 20 vice- chancellors requested further information about the Centre and one even invited us to visit so they could learn from our experiences. We are also keen that Justice Sachs visit Aberdeen next year and are currently exploring dates.”

The Centre is hosting several events on Thursday 13 May with a leading figure in international development focusing on how advances in science and technology have the power to transform the lives of some of the poorest people on the planet.

Professor Jeff Waage, Director of the London International Development Centre, will visit the campus to launch in Scotland his new book, entitled Scienceand Innovation for Development and co-authored with Sir Gordon Conway of Imperial College London. This challenges policymakers worldwide to raise the profile of science and maximise the benefits of scientific progress for people living in some of the poorest regions of the world.

Colleagues from Higher Education Institutes with International Development Centres throughout Scotland have been invited to participate in the lunch-time book launch and this will be followed by a discussion facilitated by Prof Waage on the role of such centres and how best to build capacity and strengthen partnerships:

·         The book launch at 12.30 at King’s College (Room KC F8) is also open to all University staff and students and following Prof Waage’s presentation there will be a panel discussion chaired by Professor Anne Glover, Chief Scientific Adviser for Scotland.  Panel members include: Dr Andree Carter of the UK Collaborative on Development Sciences; Mario Konyen Joseph from the Windle Trust International; Dr Hilary Homans of the Centre; and Professor Ian Diamond, Principal of the University of Aberdeen.

·         Professor Waage will also make a presentation on the Successes in science and innovation in developing countries to the general public at 6pm at the Suttie Centre for Teaching and Learning in Healthcare at Foresterhill.  This event is open to all as part of the Word Festival and free places can be booked by calling 01224 559679.