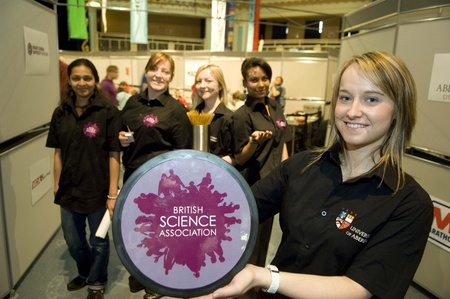 A successful bid led by the University of Aberdeen to host the UK’s leading public science festival will place Aberdeen and the north of Scotland firmly among the nation’s great science cities and regions.

The announcement by the British Science Association confirms that the University and its partner TechFest-SetPoint fought off stiff competition from around the UK to bring the prestigious annual British Science Festival to Aberdeen in September 2012.

The British Science Festival has an illustrious history spanning 178 years, and has developed into the largest public access celebration of science in the country.

The last time the festival was in Aberdeen was almost 50 years ago in 1963, and 2012 will be its first visit to Scotland in over ten years.

The week-long event is anticipated to attract at least 40,000 people, engaging them with the latest thinking in science, technology and engineering, and with events aimed at families, schools, and people of all ages and interests.

The economic benefits to the area are expected to be matched by the national profile the event will attract for the partner organisations, sponsors, and region.

The University will host the festival from September 4-9, 2012 at King’s College, Old Aberdeen, and at the Foresterhill health campus.

There will also be events at venues across the city and Aberdeenshire, and delivered virtually to remote areas of northern Scotland using advanced technology being developed at the University.

Key to the success of the bid was the quality of ongoing close working partnerships between the education and research sector and cultural providers across north-east Scotland, together with the University’s track record and commitment to its growing programmes of engagement with local communities, schools and business sector.

Welcoming the announcement, Professor Ian Diamond, Principal and Vice-Chancellor of the University of Aberdeen, said: “I am delighted and very excited that our team has secured this important flagship event for our home area. The University has a long and distinguished history of engaging its community at the frontiers of research. This goes back to distinguished professors in the 1700s who were pioneers in their fields and also in their commitment to inspiring and enthusing the public with their discoveries.

“Today, it is more important than ever that we engage and debate widely on the impact of research on every aspect of our lives, and on our urgent need to harness its potential to tackle the global challenges we now face.”

The planning team will be led by Professor Dominic Houlihan, the University’s Vice-Principal for Research and Commercialisation, who added: “There is huge enthusiasm for the festival within the University, and with this excellent news we are keen to sit down with colleagues across the north-east’s education and research sector to plan the practical aspects of working together to produce an outstanding experience for the many thousands of visitors we expect.

“We know that this will attract people to Aberdeen from all parts of the UK and we will also be talking to our local authorities, potential corporate partners, and economic development bodies to maximise the business benefits for the area.”

The success of the flagship annual TechFest-SetPoint programme was a key component of the bid, and the subsequent decision by the British Science Association to bring the event to Aberdeen.

Director of TechFest Liz Hodge said: “The 2012 event will be a fantastic opportunity for our well-established regional festival TechFest In September to partner with the British Science Association Festival of Science to attract an even larger audience.”

Commenting in her role as Chief Scientific Adviser for Scotland, Professor Anne Glover expressed her reaction to the announcement saying: “This is wonderful news for Scotland, and especially for Aberdeen and the north-east. The quality of research in the region’s universities and research institutes is at the forefront of our knowledge in many areas of science and technology, including developing innovative new drugs, the science we need to develop renewable energies, the potential of digital technology to transform our most remote communities, the complex connections between food and health, and much more.

“There is a real appetite for learning more about science and engineering in the region and this major national event will enable the University of Aberdeen to work with an ever increasing number of partners to offer a wonderful programme for the community.”

Sir Roland Jackson, Chief Executive of the British Science Association, explained the thinking behind the award to Aberdeen: “The British Science Association is delighted to award the 2012 festival to Aberdeen. An element of the bid which really stood out was the potential to build on the excellent partnerships already in evidence between the region’s universities, further education colleges and specialist research institutes, and the strong links with the local authorities, the economic sector, and with the unique mix of urban and rural communities.

“We were also impressed by the active role the Aberdeen branch of the Association has played in public engagement with science over the years, excellent facilities such as Satrosphere, the Natural History Centre and community venues across the region, and an outstanding track record which includes TechFest and the extremely popular series of Café Scientifiques.”