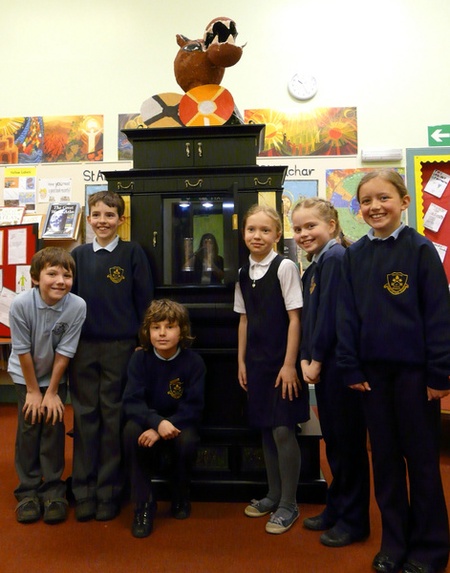 An Aberdeen Primary School has created its own museum collection with more than 100 exhibits ranging from model ships to Viking shields.

St Peter’s Primary School pupils became the first to make use of a special cabinet commissioned by the University of Aberdeen, which allows school children to become curators of their own mini museums.

Based on the majestic cabinets given to royalty in the 17th century, it is thought to be the first of its kind produced in the last 300 years and it took Deeside furniture maker Tom Ironside, of Finzean, more than six months to construct.

The design copies the Augsburg Art Cabinet created by Philipp Hainhofer and given to the Swedish King Gustavus Adolphus in 1632.

P5 pupils at St Peter’s, on Dunbar Street, have been busy preparing their own collection which will be housed in the cabinet’s 70 drawers, display areas and secret compartments.

They each brought in a treasured possession which reflects something about the school, Aberdeen, or themselves.

These were then divided up by theme, including wooden toys, animals, shiny things from around the world, stones and shells and Vikings. They are separated within the cabinet to allow the different audiences who will discover its hidden contents to view them by collection.

Neil Curtis, senior curator of Marischal Museum who has overseen the project, said the idea was to encourage children to think about museums as a process and how they are created, rather than as simply a display of objects.

He said: “The Hainhofer cabinets were all about prestige and showing off the magnificent royal collections in something which matched the splendour of the items contained within it but in the 19th century museums became more factual.

“By reproducing this kind of cabinet to house the items from St Peter’s, we hope to bring back some of that magic and awe of displaying collections.

“I have been very excited to see the class find out about some of earliest museums of 400 years ago, create their own collection of precious objects and now put them together in this stunning cabinet for their friends and families to see.

“The University’s museum will now be able to work with other groups to create and display different collections.”

As well as gathering the collection and displaying the items within the cabinet, the pupils organised a launch event which will take place today (April 27) for local councillors and visitors from the University, schools and churches.

They will also host a special event to show off their mini museum to parents and guests.

Primary 5 pupil Jennifer Harper (age nine) said: “We have been doing this very special project and we are very excited about the event because we have worked really hard on it.

“We hope people will find it really interesting and we thank Mr Curtis from the University of Aberdeen because he has helped us so much.”

Class teacher Mrs Amy Bain added:  “This has been a whole class project, with all the children contributing great ideas and taking on special jobs. It has really caught their imagination and they have brought in a whole variety of fascinating objects for the cabinet.”

Following the display at St Peter’s, the University of Aberdeen’s museum team will work with other schools and groups to help them create their own exhibitions.