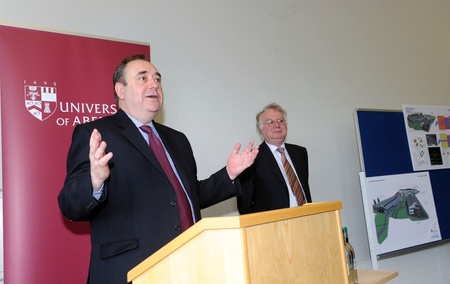 Plans for a new £5.8M business complex which will help support and grow the sector are to receive £2.6M from the European Regional Development Fund – which promotes commercialisation and innovation.

During his visit, the First Minister announced that European funding of more than £9.3 million is being invested in new projects that will harness the economic potential of Scotland’s world-leading research base and support the creation of 740 jobs across Scotland.

The University of Aberdeen is leading on the proposed development which will provide accommodation for new spinouts and already existing life sciences companies.

Scottish Enterprise will also provide funding for initial technical appraisals for the two-storey facility which will allow small companies to develop – potentially leading to the creation of new jobs and new partnerships between industry and academia.

"This Government recognises the importance of capitalising on Scotland's competitive advantages and this funding will support projects that aim to strengthen links between Scotland’s research base and business community.

“It’s important that our academics and entrepreneurs have access to support, particularly in this challenging economic climate, so that they can stay at the forefront of their fields, realise their potential, seize opportunities, expand, invest and contribute to sustainable economic growth. This is why this Government continues to work closely with our universities, research institutes and industry to ensure Scotland has the right infrastructure and people to deliver success.”

Professor Stephen Logan, Senior Vice-Principal for the University of Aberdeen welcomed the news.

He said: “The University of Aberdeen is absolutely delighted to learn of the announcement confirming financial backing for what will be Phase 2 of our Life Science Innovation facility on the Foresterhill health campus.

“Our first Life Science Innovation building developed in partnership with Scottish Enterprise, Aberdeen City Council and NHS Grampian opened in March last year. It is now a base for one of the world’s largest pharmaceutical companies, Pfizer, which is a tremendous coup for Aberdeen.

“This new Life Science Innovation facility will further support Aberdeen City and Shire’s booming life sciences sector by offering a base for young companies working on the commercialisation of life sciences research.

“Funding for the building is further evidence of the region’s growing reputation as a centre of excellence for life sciences.”

A future tenant of the building will be Antoxis, a company spun out of research from the University of Aberdeen Rowett Institute for Nutrition and Health and developing new drugs for ageing disorders, and continues to collaborate with scientists within the IMS.

Scott Johnstone, Antoxis Chief Executive Officer, said: ““This news comes at a great time for us. We have our own in-house programmes but benefit from Aberdeen’s world class science base to advance our compounds to the next stage. Having access to one of the most efficient clinical facilities in the country will enable us to move on to the next phase of our development.

“Pfizer has also endorsed Aberdeen, not just as a source of company acquisition, but as great place for collaboration. No life science cluster is complete without access to early stage finance and Aberdeen, and Scotland, leads Europe with a sophisticated Angel community willing to invest in early stage life science businesses. Having the commitment from the Scottish government in building these facilities corroborates all of this”

She said: "Access to, and partnerships with the world-class clinical and academic research available in Aberdeen is key to the success of local innovative, growing businesses such as NovaBiotics, a clinical-stage drug discovery company already benefitting from the expertise, facilities and networks available within one of Europe’s largest single site biomedical campuses.

“I'm delighted with this news and there's no doubt of the potential it has to further enhance Aberdeen's reputation as a globally recognised, leading biotech cluster and to facilitate sustainable growth by providing the very best foundation for our start-ups of the future. In a broader sense, Scotland's first-rate commercial life science base can only benefit from these developments and NovaBiotics remains a very proud component of this thriving and expanding sector."

The new Life Science Innovation building will be developed on the site of the old children’s hospital, just off Cornhill Road. Once all funds have been raised, the building should take 18 months for completion.

The life science company base in the region is growing around 6% per annum, and in 2008 this was more than three times the rate of the Scottish economy. Interviewees in a study identified lack of suitable premises as a constraint to growth.