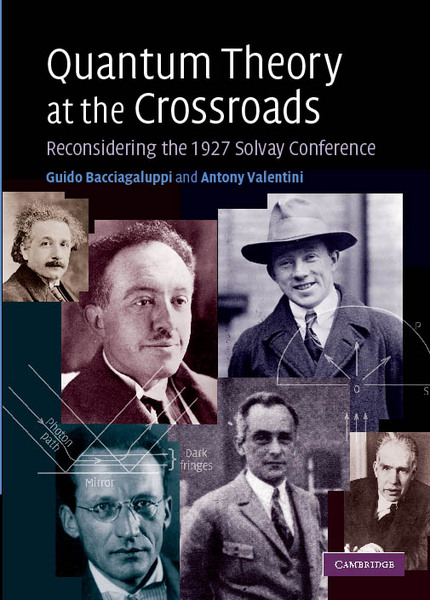 A debate which split the leading minds of the 20th century - and forms the basis of our understanding of modern physics - is the subject of a new book co-authored by an Aberdeen academic.

The 1927 Solvay Conference was attended by the world's most notable physicists, including Albert Einstein and Marie Skłodowska-Curie.

The popular belief is that it settled the interpretation of Quantum Theory – a cornerstone of modern physics.

But a new book, Quantum Theory at the Crossroads, launched on March 9, sheds new light not only on the conference but on its significance for our understanding of modern physics.

It is co-authored by Dr Guido Bacciagaluppi, a senior lecturer in philosophy at the University of Aberdeen, and Dr Antony Valentini, a research associate in the Theoretical Physics Group, Imperial College London.

The Solvay Conferences, established by the Belgian industrialist Ernest Solvay, provided a focus for reflection on the fundamental problems in physics, and the fifth, held in 1927, is the most famous – not least because 17 of the 29 attendees were or became Nobel Prize winners.

At the time physicists were struggling with the basic concepts and meaning of Quantum Theory – the set of scientific principles describing the behaviour of radiation and matter - and this led to strong clashes between Einstein, Niels Bohr and others.

Dr Bacciagaluppi said: “The general opinion is that this was the time and place where most of the issues around Quantum Theory were resolved. Instead, as one of the participants remarked, it was where the confusion reached its peak.

“The meaning of Quantum Theory is still one of the most puzzling and interesting questions we struggle with in physics and philosophy.

“The book looks again at the historical debate and puts it in a contemporary perspective to stimulate future debate and discussion.”

In addition to the extensive treatments of both the historical background and the contemporary relevance of the conference, in Quantum Theory at the Crossroads, the entire proceedings and discussions have been translated for the first time into English. The book also contains previously unpublished material from the conference.

Dr Bacciagaluppi added: “At the time the lectures were written in German, French and English and then translated into French. We have gone back to the original sources to produce a definitive edition of the text and ensure that what we have is an accurate representation of what was said.

“We are dispelling the old myths about the conference having been where everything was sorted out and about the alternative views presented there.

“One of these views was that of French physicist Louis de Broglie. He is famous for first proposing the notion of matter waves, but in his original approach the waves literally guided the motion of particles.

“The standard historical view gives the impression that his ideas were marginal to the discussions at the conference and encountered decisive objections, but if you look at what was said, this is clearly false.

“De Broglie’s approach is still relevant today - in the 1950s there was a revival of his view, and since the 1980s, although I would not call it mainstream, it has been developed into a fully-fledged alternative approach to modern physics - among others by my co-author.

“These debates over Quantum Theory have been largely suppressed in historical consciousness, but through the book we are bringing them to the fore and looking again at the foundations on which our modern understanding of physics is based.”

Dr Valentini speaks on 'Quantum Mechanics and Reality: the Schism in Physics', with Dr Bacciagaluppi in the chair, for a joint seminar of the Centre for Cultural History and the Centre for the History and Philosophy of Science, Technology and Medicine,  on March 9 2010, Edward Wright building F61, 3.30-5pm, followed by the book launch. For more information visit www.abdn.ac.uk/ch/seminars.shtml

Quantum Theory at the Crossroads: Reconsidering the 1927 Solvay Conference is published by Cambridge University Press www.cambridge.org/catalogue/catalogue.asp?isbn=9780521814218