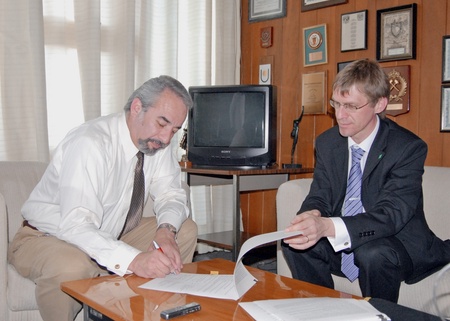 The University of Aberdeen has signed a Memorandum of Understanding with the Universidad Nacional Autónoma de México (UNAM), Faculty of Engineering and Earth Sciences to promote collaborative research projects between the two institutions.

Aberdeen and UNAM already collaborate on the exchange of postgraduate students, particularly those working on projects related to deep water petroleum geology within the Mexican oil & gas industry.

The agreement signed between the two universities will permit joint collaborative applications for new research projects to take place.

The relationship between the University and UNAM has been developing since initial discussions began in 2007, and has been facilitated and supported by UK Trade & Investment, the British Embassy in Mexico City, and Scottish Development International.

Mark Critchley from the University of Aberdeen explained: “This agreement marks a further strengthening of links between the oil & gas sector in the UK and Mexico, and will support other initiatives established in the last few years by the University in working with Mexican higher education and research establishments and research organizations and industry.

“The two universities have an integral role in the oil & gas sector in both nations, and of course being located in the Energy Capital of Europe the University of Aberdeen is a key international research partner”.

For UNAM the relationship will be managed by Dr Ricardo José Padilla y Sánchez, Head of the Division of Earth Sciences in the Faculty of Engineering.  It is anticipated the relationship will grow to build university to industry connections in both countries, with the Mexican industry also likely to participate in the UK National Subsea Research Institute, of which the University of Aberdeen is a founding partner alongside Subsea UK, Robert Gordon University, the University of Dundee and Newcastle University.

This relationship will reinforce the process of knowledge exchange and technology transfer between the UK and Mexico as the national oil company Petróleos Mexicanos (PEMEX) seeks to accelerate development of deep water hydrocarbon reserves in the Gulf of Mexico.