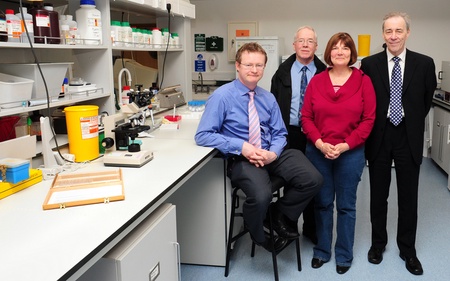 A concert in memory of a North-east musician has raised £8,000 for research into two of Scotland’s fastest rising cancers.

Today (Thursday, February 25) the wife of the late Paddy Byrne - who suffered from gullet cancer - and his close friend and band mate John Barclay  - who is in remission from stomach cancer - will hand over a cheque to Dr Russell Petty the scientist and clinician who treated them both.

The money will help further research into stomach and gullet cancers suffered by around 1,000 new patients in Scotland each year.

Paddy, who lived in Inverurie and was a well known face in the local music scene, was diagnosed with cancer of the oesophagus in September 2007.

In a strange twist of fate John - who played in various bands with Paddy over the last 25 years including The Epics – was diagnosed with stomach cancer the following June.

Paddy, who was a material controller with an offshore supply company, lost his battle with the disease in January 2008.

The 63-year-old, originally from Dublin, was remembered in style this month when Paddy’s widow Joyce and John organised a musical fundraiser to celebrate Paddy’s life at Inverurie Town Hall.

Tickets for the event – which involved performances from The Epics and five other bands – sold out in two days.

John, who has undergone surgery, two bouts of chemotherapy but is now down to four monthly check ups, said: “It was a fantastic night and we were absolutely delighted that so many people came along and helped us celebrate Paddy and raise funds at the same time.”

The 63-year-old HR manager who lives in Danestone, Aberdeen, added: “We wanted to raise money for Dr Petty because stomach and gullet cancers don’t seem to receive the same research funds as other cancers.

“We hope this is just the first of a number of fundraising events for this area of cancer research.”

Dr Petty, Clinical Senior Lecturer in Medical Oncology at the University of Aberdeen, and Consultant Medical Oncologist with NHS Grampian, added: “It was a great night and I am absolutely delighted that Joyce and John thought to raise funds a well as remember Paddy who was obviously a very well known and liked figure.

“Gullet and stomach cancers are two of the most rapidly rising cancers in Scotland and affect many people here in the North-east of Scotland.

“It is tremendous that a local effort is benefiting local research. All the money raised will be ploughed into our work here at the University of Aberdeen where we are trying to take breakthroughs in the lab and develop them into treatments for patients with these types of cancer.”