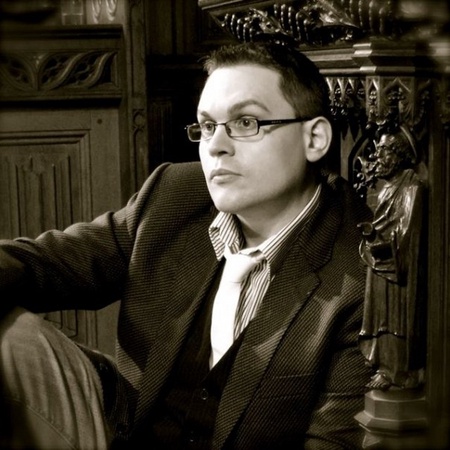 Music from a new CD by an Aberdeen composer, released to rave reviews, will be performed at the University of Aberdeen's annual Carol Service.

Dr Paul Mealor, Senior Lecturer in Music at the University has enjoyed widespread success with Stabat Mater, a collection of sacred vocal and choral music.

Initial stocks of the album sold out within weeks of release and a second run is now on order, available from all good record stores.

The recording was made earlier this year at King’s College Chapel with soprano Irene Drummond, pianist Drew Tulloch and the Con Anima Chamber Choir.

A piece from the CD, O Sanctissima Maria, will be performed at the University of Aberdeen’s end of term Carol Concert on Wednesday December 16, at St Machar’s Cathedral, starting at 8pm.

O Sanctissima Maria will also be broadcast on BBC Radio 2 as part of a Christmas Carol concert in 2009, and received its Irish premiere at St Patrick’s Cathedral, Dublin, on November 22.

For the Carol Service, the piece will be performed by the King’s College Chapel Choir, led by Dr Roger Williams, Master of Chapel and Ceremonial Music and Organist to the University.

The service will also include the performance of many traditional Christmas favourites and readings will be given by members of the University community.

Dr Mealor said he was delighted by the positive response to his album, a follow-up to his first album, Borderlands (2004)

He said: “I am amazed at how the music and CD have been received, with excellent reviews in publications here in the UK and in America, including Gramophone Magazine, the New York Times, Los Angeles Radio, Princeton Radio and the Sunday Herald.

“The music is contemplative, meditative and speaks directly to people. I have already received emails from across the world detailing how my music has touched people.

“One woman wrote of how she turned to the Stabat Mater for comfort during her son’s illness and death. It is very touching for me to hear such real stories of the healing power of music and I’m grateful people have taken the time to express their feelings for my work in this way.’’

2009 has proved a successful year for Music at the University of Aberdeen. Its biennial Music Prize attracted entrants from a record number of counties – 36 worldwide – and the weekend of workshops and performances, culminating in a gala concert, proved a hit with north-east audiences.

The sound Festival – one of the largest festivals of new music anywhere in the UK – received record audience numbers, and the Department of Music hosted a glittering residency from internationally renowned soprano, Dame Emma Kirkby.

Prof Pete Stollery, Head of Music, added that at a time when the arts might be facing cuts, money and effort is being invested at the University of Aberdeen to ensure the importance of culture and art remains an integral part of both students’ education and the university’s public engagement programme.

“Here we believe the arts are extremely important and that is reflected in our busy 2009 programme,” he said.

“We have a growing Music department which is held in high regard across Scotland and beyond.”

“There is a real resurgence of music of international quality in this corner of Scotland and initiatives like the Aberdeen Music Prize and sound have played a major role in bringing about that revival.”

Reviews of the Stabat Mater include:

·         ‘Sublime! Stylistically evolved from Pärt and Gorecki it is a work of deep introspection with luminous tonality and a real directness and openness of expression… I wept tears of joy from beginning to end…’  Carter Joel Burrell (NYE, NEW YORK)

·         ‘There is an harmonic distinction and radiant expression to the music of Paul Mealor. His writing is stylishly melodic with a fine sense of shape and form….This is new music with instant connection.’  Frank Carroll (Sunday Herald)

·         ‘With the release of his Stabat Mater, the young composer Paul Mealor becomes securely established as one of the most compelling voices in contemporary British music. Here he proves himself a remarkably gifted choral director too. In this superb recording he moulds Con Anima Chamber Choir into his own ardent musical instrument.

The CD starts with the work which provides its title: a radiant four movement setting of the Stabat Mater. The four highly individual movements are ingeniously linked together to produce a convincingly homogenous whole. The third movement makes a deliberate nod in the direction of Carl Orff while the entry of piano and especially the soprano soloist injects immediacy and vulnerable humanity into Mealor's affecting vision of the Holy Mother beneath the cross.’ Alan Cooper (Amazon.co.uk)