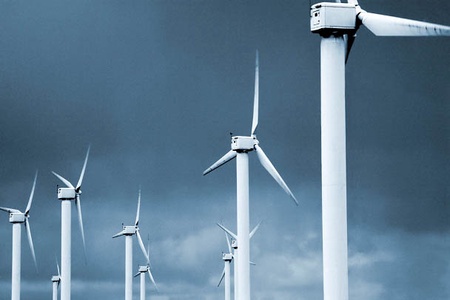 A new type of power device which could help large networks of offshore wind farms and a European Supergrid become a reality is being investigated by Aberdeen scientists.

Academics from the University of Aberdeen are researching a new method for direct current (DC) power conversion which could be used for subsea power transmissions.

If developed commercially the device could have major implications in helping the UK meet targets under the European Union Renewable Energy Directive of 15% of power generation coming from renewable sources by 2020.

At present subsea power collecting networks are based on alternating current (AC).

AC power can only be transmitted over relatively short distances meaning that current offshore wind farms operate close to shore.

The existing technology for DC power allows transmission over long distances via subsea cables but this is limited to transmission from one point to another.

The proposed convertor would mean DC power could be used within a power grid format - meaning that large networks of wind farms could be connected to a common DC interconnector and supply power to one onshore power point.

This type of convertor could be vital to the success of the proposed European DC Supergrid – the high voltage subsea transmission network which could ultimately cover the North Sea, Baltic Sea, Irish Channel, English Channel, the Bay of Biscay and the Mediterranean, and make wind a continental resource. The Supergrid would also facilitate trading of power between European Union countries even when wind power is low.

The convertor could also be of potential importance to the Desertec Industrial Initiative - a large DC power transmission network spanning Europe and North Africa which is promoted by a consortium of 12 European businesses. This initiative aims to supply Europe with 15% of its energy needs by 2050 using the solar energy from Sahara and North sea wind power.

Researchers from the University's School of Engineering have been awarded £167,000 of funding from Scottish Enterprise's Proof of Concept Programme for the 18 month project to develop a prototype of the power convertor and initiate commercialisation activities.

Dr Dragan Jovcic from the University of Aberdeen’s School of Engineering who is leading the study said: “There are around 60 DC point to point grids operating worldwide which allow DC power to be transmitted from one point to another - but currently the technology does not exist to use DC power transmission within a power grid at multiple DC voltage levels.  The new DC to DC power convertor we are researching could make this possible.”

“This type of DC power convertor has not been created before primarily because demand from industry has not been there.”

“Now, with development of large offshore power plants, and the increasing interest for a European Supergrid, there is a much stronger need for this type of device which would facilitate subsea power transmissions on a much wider scale.”

“If our concept is proven, in the long term future this device would be absolutely vital in all aspects of subsea power transmission, in integrating large DC sources and loads and could impact positively on the renewable energy sector in particular.”

A DC to DC Power convertor is an electronic circuit which transfers power between two or more source of direct current (DC) at different voltage levels. It is used in numerous applications in many industries (like consumer electronics) at lower power levels, but currently not at high powers (Megawatt range).

About the Proof of Concept Programme

Scottish Enterprise’s Proof of Concept Programme supports the pre-commercialisation of leading-edge technologies emerging from Scotland's universities, research institutes and NHS Boards.  It helps researchers to export their ideas and inventions from the lab to the global marketplace.

It is not simply another source of research funding. Successful applicants must demonstrate that their ideas have originality and true commercial potential.  Ideas should have the potential to form the basis of either a new high growth business or a license to an existing company.  The Programme is partly funded by the European Unionand more information can be found at www.scottish-enterprise.com/proofofconcept .