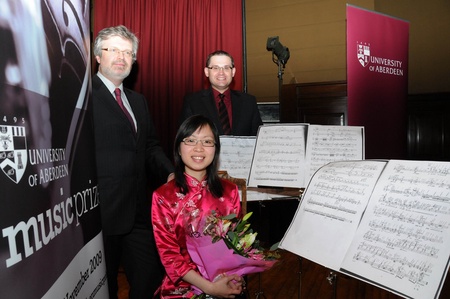 The Aberdeen Music Prize hit the right note with aspiring composers and audiences in the Granite City alike as the winner of the 2009 competition was unveiled.

A successful weekend of performances and workshops ended with a Gala Concert at the Cowdray hall on Sunday evening where Hong Kong’s May Kay Yau took the honours.

The Aberdeen Music Prize, a collaboration between the University of Aberdeen and the BBC Scottish Symphony Orchestra, has earned a reputation as one of the most prestigious contemporary composition prizes across the globe.

This year it attracted entrants from 36 countries across the globe and May Kay Yau can expect her profile to rise in cotemporary music circles.

As winner of the 2009 Aberdeen Music Prize, she received £5,000 in the form of a commission to write a full piece for symphony orchestra, which will be premiered by the BBC SSO at The Music Hall in 2010, before being broadcast on BBC Radio 3.

The biannual contest has brought great success to previous recipients and Jun Lee, who was victorious at the 2007 event, has since worked on a variety of projects, including a commission to re-orchestrate Apollo for a screening of For All Mankind at the Science Museum in London.

Doctor Paul Mealor, Director of the Aberdeen Music Prize, said: "Since it was first launched, this search for creative talent has helped to develop Aberdeen's role as one of the major cultural centres in the UK.

“The 2009 Aberdeen Music Prize certainly did not disappoint and we attracted good numbers to each of our events, and for the grand finale and gala concert.

“May Kay Yau is a worthy winner and I look forward to hearing her commission piece when it is premiered by the BBC Scottish Symphony Orchestra next year.”

May Kay Yau, Hong Kong, entered the Hong Kong Academy of Performing Arts to study at the age of 17. There she was the winner of the Concerto Trial and had her first orchestral piece presented in the concert of the 5th Anniversary of the Establishment of Hong Kong Special Administrative Region. Following that she was awarded a scholarship to pursue a masters degree at the Royal Academy of Music in London with Paul Patterson. Her compositions have been performed in various music festivals in China, Hong Kong, Japan, Korea, Israel, Portugal, Greece and UK. She has also collaborated with the London Sinfonietta, the BBC Singers, National Theatre, RAM Harp Ensemble, and the Gemini Ensemble. She is the composer-in residence with the Wuji Ensemble. May Kay is currently a third year PhD student at the University of Bristol, funded by the ORS and the University Research Studentship.