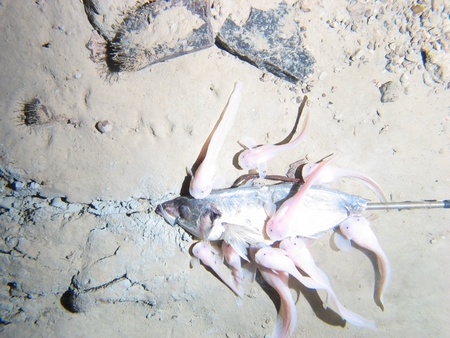 Scientists from the University of Aberdeen, Japan and New Zealand have successfully photographed the deepest fish in the southern hemisphere at 7561 metres deep in the Kermadec Trench, just north east of New Zealand.

These images are strikingly similar to deepest fish ever caught on film (another snailfish: Pseudoliparis amblystomopsis) at 7700m in the Japan Trench in 2008 by the same team.   However, these fish are not the same species but must share a common ancestry.

These new images raise fascinating questions about the existence of these trench-dwelling fish.

In addition to their uncanny appearance, both species appear to inhabit the same depth ranges, 7000-8000m, but are isolated geographically by thousands of miles.

These fish can only survive at the immense pressure found at these depth and have no apparent means of travelling between the trenches.

Until now the Notoliparis kermadecensis has only been physically caught once in 1952 by the Danish Galathea expedition.  In 2007 in was caught on film at a shallower depth of 6900m by the HADEEP team but in very low numbers.

These results will contribute further to the understanding of life in the deepest places on Earth.

Voyage leader, Dr Alan Jamieson from the University of Aberdeen, said: “It’s fascinating to find these large aggregations of fish which are so similar yet incredibly isolated from one another.  Why these delicate fish have chosen to inhabit such immense depths is still a mystery.”

Dr. Toyonobu Fujii, from the University of Aberdeen, said: “Historically, fish inhabiting these deep ocean trenches have always been thought to exist in incredibly low numbers, it appears that is not the case.”

Dr. Ashley Rowden from the New Zealand’s National Institute of Water and Atmospheric research institute added: “These new findings from the deepest areas of the New Zealand seafloor will contribute greatly to our understanding of biodiversity in the region.”

The University of Aberdeen has a long involvement in environmental and marine research, and for over 50 years University researchers based at Newburgh in Aberdeenshire have been at the forefront of research in the marine environment. Since opening in 2001, Oceanlab has been instrumental in expanding our knowledge of environments near and far, from the ecosystems of the nearby Ythan Estuary to the discovery of new species of creatures living the world’s deepest ocean trenches. Oceanlab scientists are also involved in practical international collaborations to monitor for the first time changes to the deep ocean floor, of much interest to the global hydrocarbon industry.