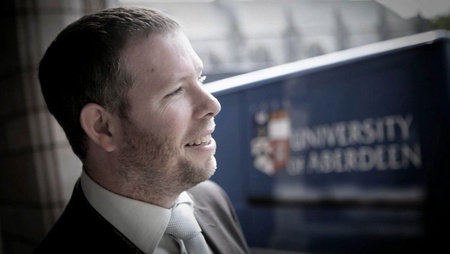 An IT program manager who survived a 200mph glider crash which killed his good friend was among the finalists up for a prestigious trade award.

Mike Whyment – who suffered appalling injuries in the accident which happened two years ago – was among 10 shortlisted for the title of Project Manager of the Year at last night’s British Computer Society (BCS) and Computing UK IT Industry Awards.

While he was pipped at the post, to have been a finalist is still a remarkable achievement for the University of Aberdeen staff member who was initially told he might never walk again, and who spent more than three months in hospital, and was, until recently, undergoing regular physiotherapy.

Mike – who in August wed Fiona Stitt, the nurse he met in Aberdeen Royal Infirmary – is delighted to have been a finalist in the awards, which celebrate the very best in the UK IT industry.

He said: “I am thrilled to have been a runner up for Project Manager of the Year. I don’t feel I have done anything other than what is required of my day to day job. It’s certainly flattering that someone saw fit to put my name forward.”

“He is a splendid and extremely positive role model who has project managed an impressive portfolio of highly complex IT projects.”

Mike’s projects include moving all University users from one email and calendaring system to another  in a switchover that was the fastest in UK higher education.

The 33-year-old also project managed the redesign of the University’s new website together with the rollout of an email and calendaring system to all students and alumni.

Mike’s projects are remarkable accomplishments given that some of them were carried out when he was still recovering from the crash in which thought he was going to die.

Mike and his 51-year-old gliding partner James Davidson – both members of Deeside Gliding Club near Aboyne - had been taking part in the UK Mountain Soaring Championships on September 2, 2007 when bad weather developed.

Rather than risk flying back to Aboyne they decided to “play safe” and land in a field near Tomintoul.

“I can remember everything as clear as day,” said Mike. “One thing went wrong, a second and a third thing went wrong and then the next thing we were staring at the ground vertically and then hit it at 200mph. I thought ‘this is the end of us’.”

Mike’s injuries included broken bones in his foot; he broke his right leg in two places; his pelvis was broken in three places; his back was broken in four places and his thumb in nine places. He also split open his head and lost a tooth.

Despite his extensive injuries, Mike was able to stay positive as he hung suspended in his harness in the wreckage.

“I thought if I can get out of this and I’m in a wheelchair for the rest of my life I will be happy.”

Mike knew if he was to have any chance at all he needed to reach the mobile phones and survival kit in the storage compartment behind his head and get out of the glider’s remains.

Although he feared undoing his harness might sever his spinal cord, Mike was able to unfasten it, retrieve the items and drag himself free.

Fortunately two people saw the glider go down and rescuers were at the scene within 30 minutes.

Mike was airlifted to Raigmore Hospital in Inverness where the initial assessment was that he would be in hospital for six to nine months and may never walk again.

After 12 days Mike was moved to Aberdeen Royal Infirmary where he remained until November. After that Mike had daily physiotherapy and regular hydrotherapy for several months.

Mike, who returned to work seven months after the accident, says: “Everything is now functional. My thumb doesn’t have the same movement, my leg and back still give me some pain and my foot will be sore if I do a lot of walking but rather than focus on the negative I focus on the positive.

“I had 30 years of good life before the accident and some people don’t get that. There is always someone worse off than you. The accident has made me identify the important things in life.

“I would just like to thank the emergency services and medical staff for all their incredible work and for my family and friends who were a tremendous support throughout.”