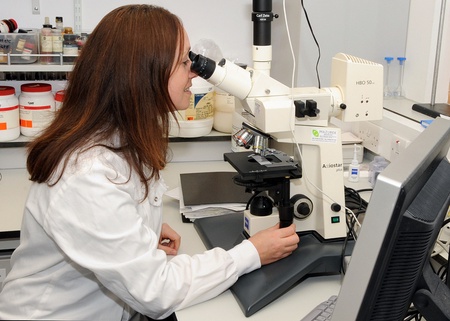 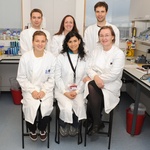 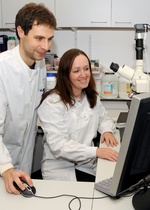 A microbiologist whose research into bacteria might ultimately help pave the way for the development of new antibiotics and possibly new ways of sterilising food is being rewarded for her work.

Dr Gail Ferguson will tomorrow (Tuesday, November 10) receive the prestigious Wain Medal which is given each year to a young scientist excelling in biochemistry research.

Bacteria that thrive at the bottom of the sea is one area being investigated by the senior lecturer who works at the Institute of Medical Sciences at the University of Aberdeen.

“We know very little about how bacteria survive at the bottom of the ocean with all that weight of water upon them,” said Dr Ferguson, who receives funding by the Biotechnology and Biological Sciences Research Council (BBSRC) and the Medical Research Council.

“But what we have discovered is that they actually love the pressure of the water and that they grow optimally with all that incredible weight.

“Biotechnology industries already use components of microbes called extremophiles that live in extreme environments in products such as washing powders.

“Perhaps some point in the future bacteria that live on the sea floor could be used by the food industry which is looking at ways of using pressure instead of heat to sterilise food.”

Dr Ferguson is collaborating with organic chemist at the University, Professor Marcel Jaspars, on the ocean bacteria work.

“Like bacteria in soil, bacteria in the ocean produce antibiotics which act in a preventative way and stop other bacteria growing in their area.

“But what we are looking at is whether this deep ocean bacteria could be used to develop brand new antibiotics that are resistant to superbugs and other organisms that are harmful to people.”

Dr Ferguson is also trying to find out more about bacteria, which co-exist in the roots of leguminous plants such as green peas and alfalfa sprouts.

“Plants need nitrogen to grow but are unable to take it from the atmosphere themselves. However the bacteria that live in the roots of legumes do that for these plants, which in turn provide a food source for the bacteria.

“We are looking at the interaction of the bacteria with legumes because the mechanisms involved for their long term survival within legumes shares similarities with bacteria that cause human diseases such as brucellosis and chronic infections.

“If we can understand more about these bacteria then perhaps it could help pave the way for the future development of new vaccines or treatments for these diseases.”

As well as receiving the Wain Medal from the University of Kent, Dr Ferguson will be delivering a lecture tomorrow night in Kent entitled Stressed Bacteria.

Professor Louis Wain CBE FRS was a chemist who applied his knowledge to improving agriculture.  The University of Kent established an annual medal lecture and award in his name to honour his memory.

Dr Gail Ferguson is available for interviews and photographs. To arrange, contact Jennifer Phillips on 01224 273174.