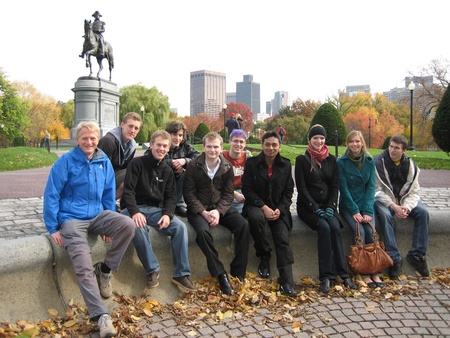 A group of students have struck gold with a revolutionary technique testing how E. coli could be used to plumb leaks in pipes.

The team from the University of Aberdeen scooped a gold medal for their efforts in the international Genetically Engineered Machine competition (iGEM), which saw 110 university teams from across the globe complete to design and assemble new biological systems.

This is the first time an Aberdeen team has entered the annual contest which took place at the Massachusetts Institute of Technology (MIT) in Boston, USA, last week.

The Aberdeen students tested how specific strains of E. coli, which are not deadly or poisonous to humans, could be used to automatically mend cracks which occur in for example, household water pipes or in cooling pipes in laboratory experiments.

The 12-strong team of students - from across academic areas including biology, physics, computing science, maths and engineering - received the gold medal in recognition of the quality of their entry, and the contribution made by the team to the development of the field of synthetic biology.

As part of the competition entry, the team presented their work to an audience of 150 scientists and presented a scientific poster detailing their work in a symposium involving over 500 other undergraduate and postgraduate scientists.

All teams competing in the contest were ranked gold, silver or bronze for their entries.

A team from Cambridge University were the overall competition winner.

Dr Ian Stansfield said: ““The iGEM project was a fantastic opportunity for University of Aberdeen students from across academic disciplines to work together to apply their knowledge to solve a unique challenge.

“The team worked on the project for nearly a year, and their dedication, enthusiasm and ability to work together as a group was the key to their success in the competition.

“Their project really stood up to the fierce competition from across the globe presented at the event, and we’re delighted that their efforts have been commended with the gold medal award.”

A description of the team’s project can be found at: http://2009.igem.org/Team:Aberdeen_Scotland

The iGEM project was funded by:

The Society for General Microbiology

The total amount of funding for the project was £33,000

SULSA is a Scottish research pooling partnership between the Universities of Aberdeen, Dundee, Edinburgh, Glasgow, St Andrews and Strathclyde, supported by the Scottish Funding Council,that promotes research excellence across a range of subject areas, including systems and synthetic biology.