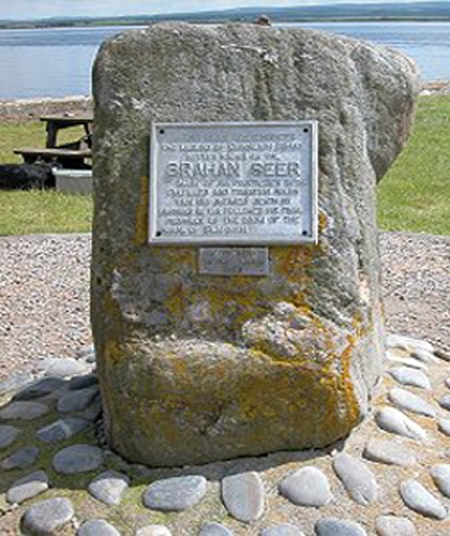 For centuries, Highland families have passed on the legend of the Brahan Seer – said to have foreseen events ranging from the construction of the Caledonian Canal to the Piper Alpha disaster.

But a University of Aberdeen teaching fellow has cast a new light on the legend in a book which has now been nominated for a prestigious award.

Dr Alex Sutherland, originally from Forres, has investigated the Brahan Seer from a new perspective, examining records which have not previously been considered in the context of the legend.

He believes he has uncovered new evidence which strengthens the argument that the legendary figure belongs to a much earlier period of history than commonly perceived.

He draws together folklore, historical events and oral tradition to show how we arrived at the popular version of the story still circulating today.

The Brahan Seer is a figure celebrated for his prophetic gifts in the Highlands and beyond, who has long been the subject of books songs and plays. Standing stones have even been erected to commemorate his deeds and the manner of his death.

Popular accounts suggest the Seer was Coinneach Odhar, who lived around the middle of the 17th century. He is said to have foretold the Battle of Culloden, the Highland Clearances and the coming of the railways.

In this version of the legend, Odhar was put to the stake, or burned in a barrel of tar, by the Countess of Seaforth after he informed her that her husband was unfaithful - not before he foretold the dying out of the Seaforth line, which would end with a man both deaf and dumb. A prophecy which was fulfilled.

But Dr Sutherland’s book, The Brahan Seer The Making of a Legend, has uncovered new documents which suggest the origins of the Brahan Seer legend can be traced to a much earlier period and to events that took place in and around Easter Ross in the last quarter of the 16th century.

It has earned him a place on the shortlist for the prestigious Katharine Briggs Folklore Award, with the winner to be announced on November 10.

Previous research has found the name of Coinneach Odhar (or Keonich Owir) charged with witchcraft, in state documents dating from 1577, a century before the Brahan Seer’s fateful encounter with Lady Isabella of Seaforth.

He is implicated in a plot by Lady Munro of Fowlis to kill her stepson by witchcraft so that her natural son could inherit the family title. He is said to have been the leader of the Easter Ross witches.

Dr Sutherland’s book adds weight to the theory that the Brahan Seer predates much of the popular legend.

He said: “I examined records from Inverness that haven’t previously been looked at in terms of the Brahan Seer and identified a Coinneach Odhar, who lived in the 1570s.

“I believe this new historical evidence ties him to that period and he could not, therefore, have been the Brahan Seer of legend a century later, who was put to the stake by the Countess of Seaforth.

“The records show there was a Kennocht Owyr, servant to Margret Waus, accused of trading illegally in animal skins and failing to repay a loan, though charges were never brought.

“This indicates there was a Kennocht Owyr living on the borders of legality in the same place and at the same time as Coinneach Odhar was named as leader of the Easter Ross witches.

“With the movement of traders to fairs in hamlets and parishes, there is a distinct possibility that the servant Kennocht Owyr and the Keonich Owir of the witchcraft trials were one and the same.”

Dr Sutherland said he hoped his research would spark fresh interest in the legend of the Brahan Seer in the way that his own interest was inspired by reading Alexander MacKenzie’s 1877 bestselling book, The Prophecies of the Brahan Seer.

“The Brahan Seer is an important figure in Scottish Highland culture and society and is central to our understanding of the practice and prosecution of witchcraft, and the perennial belief in prophesy as a means of predicting events,” he added.

“My book provides a context for understanding the beginnings of the legend and how it has changed over time through a synthesis of historical events, oral tradition, folklore and literary Romanticism.”

The Katharine Briggs Folklore Award is an annual book prize established by the Folklore Society to encourage the study of folklore, to help improve the standard of folklore publications in Britain and Ireland, to establish the Folklore Society as an arbiter of excellence, and to commemorate the life and work of the distinguished scholar Katharine Mary Briggs (1898-1980; Society president 1969-1972).

Dr Alex Sutherland completed a PhD in history at the University of Aberdeen in 2005 and his book, The Brahan Seer The Making of a Legend, stemmed from his thesis. He now works as a part-time lecturer in the University’s School of History, where he teaches on witchcraft. He also teaches on the Medical Humanities programme in the University’s Centre for Lifelong Learning.

The Brahan Seer The Making of a Legend is available through Peter Lang AG, International Academic Publishers.