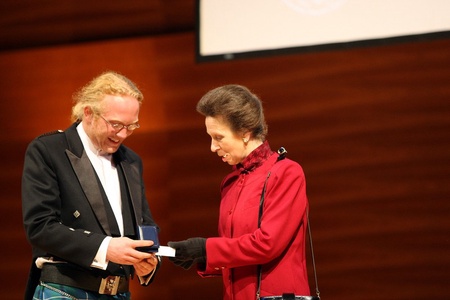 Aberdeen's Robin Parker was presented with the RSGS University Medal for the University of Aberdeen by HRH the Princess Royal at an awards ceremony to mark the 125th anniversary of one of Scotland’s oldest charities, the Royal Scottish Geographical Society, at Perth Concert Hall.

The medals are given by the RSGS to an outstanding geography graduate from the university each year. This year’s winner, Robin Parker, attended a talk by mountaineer Martin Moran, after which he was presented with the medal by Princess Anne.

Five other medallists were also awarded medals from other key Scottish universities, and were then hosted by the RSGS at the opening of their new office in Perth.

After awarding the medals, Princess Anne officially opened the new RSGS office, which is located just behind the Concert Hall in Lord John Murray’s House. The winners then had a second chance to speak to HRH the Princess Royal before she signed the new official visitors’ book to begin a new chapter of this distinguished charity’s long history.

The old visitor book from a previous headquarters was begun in 1884, by HM Stanley, the man who found David Livingstone, and has been signed by many previous medallists of the RSGS such as Shackleton, Amundsen, Scott, Hilary,Ranulph Fiennes, WH Murray, Neil Armstrong, Dougal Haston, Francis Chichester and many others.

The RSGS runs one of the most successful talks programmes in Scotland, and are hosting a number of illustrated talks in Aberdeen over the coming months. Speakers include record breaker Dee Caffari, explorer John Dunn, and science writer Fred Pearce.

For more details please check out