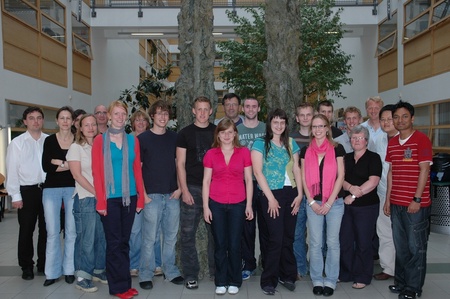 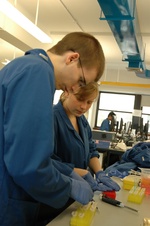 A group of Aberdeen students are investigating a revolutionary new technique that could see E. coli being used to plumb leaks in pipes.

The University of Aberdeen students are testing how specific strains of the bacteria, which are not deadly or poisonous to humans, could be used to automatically mend cracks which occur in for example, household water pipes or in cooling pipes in laboratory experiments.

The project is being undertaken by the students as part of the international Genetically Engineered Machine competition (iGEM).

The contest, which is organised by the Massachusetts Institute of Technology (MIT) in Boston, USA, will see 120 university teams from across the globe compete to design and assemble new biological systems.

It is the first year an Aberdeen team has entered the annual competition.

Twelve students from across academic areas including biology, physics, computing science, maths and engineering, are collaborating in the University team.

The research involves the students coating the inside of a pipe with a layer of sugar, followed by a thin layer of plastic.

E. coli is injected into water which flows through the pipe in the experiment.

An innate characteristic of E. coli bacteria is that it is naturally attracted towards sugar.

The students aim to genetically program the bacteria to generate extremely strong, water resistant glue called mussel foot protein.  The glue is produced naturally by mussels and is what causes them to stick to rocks and boats.

If a fracture occurs in the pipe, the bacteria are naturally attracted towards the crack by the layer of sugar.

Once enough of the bacterium has built up around the opening in the pipe, they have been genetically programmed by the students to commit suicide.

When they die the surface of the bacterium disintegrates, releasing the glue they have stored, automatically sealing the crack.

The University team are currently testing the concept using various harmless strains of E. coli to examine which are most effective in the plumbing process.

iGEM team member Annika Wipprecht who is in her fourth year of a Physics and Mathematics degree at the University said: “The first objective of the iGEM competition was to identify a concept to test.  As a team we decided to focus on examining how harmless strains of E. coli could be genetically manipulated so that they can be used to mend cracks in pipes in both household and laboratory scenarios.

“One of the most innovative aspects of the system is that in our experiment the E. coli should mend the cracks automatically meaning a leak should not occur.

“We are fine tuning the experiment using various techniques to optimise how it operates.”

The teamwill take their entry to the MIT in Boston next week, where they will compete for precedence in the iGEM Championship Jamboree.

Dr Thiel said: “The students have been working rigorously on their iGEM entry since last November.

“The project is a positive example of the benefits of bringing students together from across disciplines to apply their different academic approaches to solve a challenge.  Team work and dedication are two of the key elements to success in this contest – and the University of Aberdeen team members are displaying both in the way they are applying themselves to the project.  We are extremely confident that their entry will stand up to fierce competition from across the globe at the iGEM Jamboree in November.”

Previous year’s iGEM winners include the National Yang Ming University of Taipei, Taiwan's who tested a bacterium that could serve as an internal dialysis machine for people suffering from chronic kidney failure; and The California Institute of Technology team who redesigned E. coli bacteria to fight pathogens, treat lactose intolerance, and produce essential vitamins.

For more information on the University of Aberdeen iGEM project visit http://2009.igem.org/Team:Aberdeen_Scotland

The iGEM Jamboree takes place from October 30 – November 2 at the Massachusetts Institute of Technology (MIT) in Boston, USA.

The University of Aberdeen iGEM project is funded by:

The Society for General Microbiology.

The total amount of funding for the project is £33,000

SULSA is a Scottish research pooling partnership between the Universities of Aberdeen, Dundee, Edinburgh, Glasgow, St Andrews and Strathclyde, supported by the Scottish Funding Council,that promotes research excellence across a range of subject areas, including systems and synthetic biology.