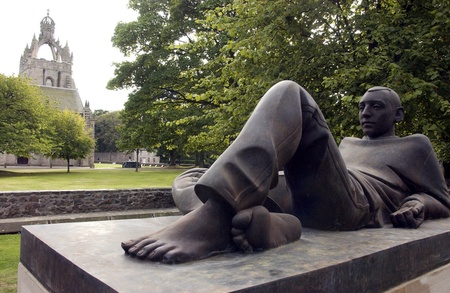 The University of Aberdeen has climbed 24 places positioning it in the top 0.5% of universities in the world, according to the Times Higher World University Rankings published today (Thursday 8 October).

The University is ranked 129th in world, the highest ranking for the institution to date – and the biggest advance in rankings of any UK university in the top 200 this year.

“The results of the recent Research Assessment Exercise (RAE 2008) conducted across UK universities confirms Aberdeen as one of the UK's top research universities. We are also making significant investment in our infrastructure including new facilities such as the Aberdeen Sports Village and the Suttie Centre for Teaching and Learning in Healthcare and the development of the £57M Library and Special Collections Centre – the largest capital fundraising project undertaken by the University.

“The University is committed to attracting outstanding scholars from across the globe through our Sixth Century recruitment campaign, and this is a key component of our success.  We have now launched the second phase of this campaign, investing a further £15M towards bringing even more internationally renowned professors and senior scholars who have achieved distinction in their fields, to the institution.”

Phil Baty, deputy editor of Times Higher Education magazine, and editor of the annual Times Higher Education-QS World University Rankings, said: “Aberdeen has truly established itself as one of the world’s leading universities, rising from 153rd last year to 129th. It has been one of our highest climbers this year – a particularly strong achievement in a year when Asian universities have been rising up the rankings and challenging the traditional UK-US dominance.

“I can only predict further improvements in Aberdeen’s international standing, as its £15M drive to attract the best academics from around the world starts to bear fruit, and after its radical curriculum reforms come into place next year.”

The list of the top 200 universities can be viewed at http://www.timeshighereducation.co.uk/Rankings2009-Top200.html.