Arsenic in rice : a recipe for nutrient loss
07 October 2009 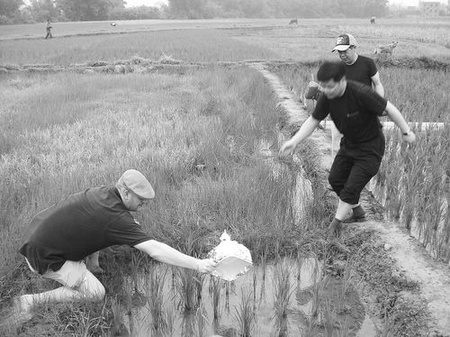 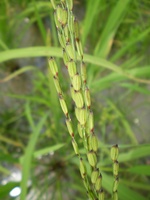 Uptake of arsenic by rice plants could be stifling crucial micronutrients such as selenium in rice grains, according to new research published in Environmental Science and Technology EST).

The findings are bad news for people in Asia, whose diet is primarily rice, since selenium helps cleanse toxic arsenic from the body.

But a second new ES&T study demonstrates the potential for breeding rice cultivars that shun the arsenic commonly found in flooded paddies.

The pair of linked studies is capped by the first measurements of arsenic volatilization from soil, demonstrating the benefits of an across-the-board approach to cutting arsenic exposure, says Enzo Lombi, a biogeochemist at University of South Australia.

Exposure to arsenic, a class 1 carcinogen for which there is no safe dose, affects hundreds of millions of people worldwide, says Dave Polya, an environmental geochemist at the University of Manchester.

Chronic exposure leads to diseases such as skin and bladder cancer.  Although most research has focused on naturally occurring arsenic in well water, new studies hint that food could be a significant source of arsenic, he says.

The arsenic composition of rice typically ranges from 100-500 mcg/kg and it is not unusual for people in Asia to eat at least 200 g rice/day, Polya says.  "Therefore, the levels in rice commonly lead to arsenic exposures at or above the World Health Organization's limit for water of 10 mcg/kg, assuming daily water intake of 2 kg/day," he says.

The anoxic and reducing environment of flooded paddies mobilizes arsenic, which is readily taken up by plants, explains Andy Meharg, a biogeochemist at the University of Aberdeen and co-author of the new  papers.

He and his team analyzed arsenic and the trace nutrients selenium, zinc and nickel in 230 soil and plant samples from three districts in Bangladesh.

In Bangladesh, well water is high in arsenic and is used both for drinking and irrigating fields.

The researchers found that although arsenic levels in the rice grains mimicked patterns observed for the soil and water, grain concentrations of the micronutrients did not reflect levels found in the external environment.

Instead, the scientists documented for the first time that selenium, zinc and nickel exhibited significant declines with rising arsenic content in the rice.

"Selenium actively promotes the efflux of arsenic from the human body," says Scott Fendorf, a soil biogeochemist at Stanford University. "Therefore, arsenic could be a double-edged sword if it is depressing selenium in rice."

One solution could be to breed an arsenic-resistant variety, says Yong-Guan Zhu, an environmental biologist at  the Chinese Academy of Sciences and co-author of the second paper.

He and his colleagues analysed arsenic in 13 different rice cultivars grown in Bangladesh, India and China. They found as much as a 14-fold difference in grain arsenic among the cultivars.

"This hints that it could be possible to breed a high-yield variety that accumulates beneficial micronutrients but not arsenic," Zhu says.  Because the variation in grain arsenic was affected by the site where it was grown, it is likely that low-arsenic cultivars will have to be bred to match regional soil types, he says.

The lack of a reliable and convenient way to measure volatilization of arsenic from soil has left this part of the global geochemical pathway a mystery, Professor Meharg says.  He and his team, for the first time, describe a robust field method for measuring arsenic volatilization in the third new ES&T study.  "This will open up a whole new area of research," Polya predicts.

He and his team found that 0.01% of soil arsenic was removed by volatilization from Bangladesh paddy soils over three weeks.  "This offers a method to help establish whether volatilization is an important part of the global arsenic budget," Fendorf says.

As studies of arsenic in rice help to clarify people's risk, governments are beginning to act.

China has set a standard of 150 parts per billion inorganic arsenic in rice, the U.K. has banned consumption of rice milk  for children under 4.5 years of age and the European Food Standards Agency is currently reviewing arsenic in rice.