£1.8 million Institute of Mathematics launched by University of Aberdeen
02 October 2009 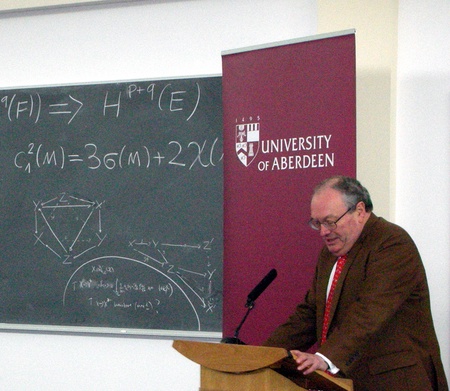 A new £1.8million Institute of Mathematics was launched by the University of Aberdeen today (Friday October 2).

The facility further strengthens the University’s position as an internationally leading institution in the teaching and research of mathematics.

Mathematics has been taught and researched at the University for over 500 years.

The new facility – which is an extension to the Fraser Noble Building on the University’s King’s College Campus – is part of a wider £9.2million infrastructure investment within the institution’s College of Physical Sciences.

The development of the facility follows the appointment of nine new academics within mathematics.

Six of these academics have been recruited to the University as Sixth Century Professors, as part of a £9million investment programme to recruit outstanding scholars who have achieved international distinction in their fields.

The Institute of Mathematics will focus on three main areas of mathematics: algebraic geometry, topology and representation theory.

The Institute was launched today in front of an invited audience of University representatives and international academics.

A two day conference which will be attended by mathematicians from across the globe – also began today at the University to mark the Institute’s official launch.

The conference brings together eminent experts from countries including France and the USA to showcase the latest thinking in mathematics.

“The development of the facility is part of a wider investment in our infrastructure, which places us well on the way towards our ambition of becoming one of the top one hundred universities of the world.”

“The University boasts a 500 year strong history of teaching the discipline.  The new facility further strengthens the University’s international position at the forefront of the mathematical field, which has been boosted by the appointment of a series of internationally acclaimed academics over the last four years.

“The Institute is purpose built for mathematical research and includes dedicated seminar and conference facilities which will be of great benefit as we continue to host events aimed at an international mathematical audience – such as the conference today.”

The mathematics conference will be held at the Institute of Mathematics in the Fraser Noble building today and tomorrow.