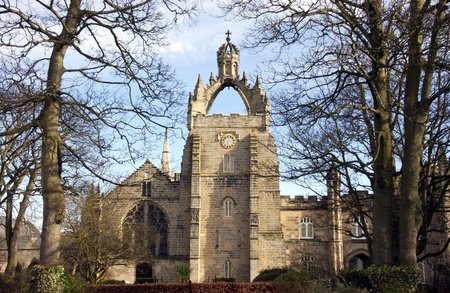 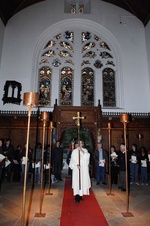 The University of Aberdeen’s King’s College Chapel will celebrate its quincentenary with a sequence of special events on Sunday (October 4).

A University Service of Celebration will start the day at 11am. The preacher will be the Very Reverend Professor Iain R. Torrance, a former Dean of Arts and Divinity at the University. Now President of Princeton Theological Seminary, he remains an Emeritus Professor of Aberdeen. He served as Moderator of the General Assembly of the Church of Scotland from 2003–04 and has also served as Chaplain to the Queen.

An original piece of music by Dr Paul Mealor, Senior Lecturer in the University’s Music Department, will be premiered at the service, performed by the chapel choir.

There will be a small exhibition of material relating to the chapel from the University’s Special Library Collections and Museum Collections in the Old Senate Room, which will be shown (with an archival talk by Professor Peter Davidson) at 1.30pm and 5pm.

At 4pm heritage consultant, Mrs Anne Simpson, will lead a walking tour of Old Aberdeen, leaving from the Old Town House. Places for all these events can be booked online at www.abdn.ac.uk /chapel500, via the Chaplaincy Office on 01224 272137 or chaplaincy@abdn.ac.uk.

The day will culminate at 6.30pm in a Roman Catholic Consecration Anniversary Mass, which will be celebrated by His Eminence Cardinal Keith Patrick O’Brien. His Excellency Archbishop Faustino Sainz Muñoz, Apostolic Nuncio, and the Right Reverend Peter A. Moran, Bishop of Aberdeen will be among the concelebrants. The preacher will be Father Allan White, OP, formerly Prior Provincial of the English Province of the Order of Preachers (Dominicans) and now the Master of the Order’s Socius for North West Europe and Canada.

Father White’s own doctorate was on the history of sixteenth-century Aberdeen, and the University’s connections with the Dominican order go back to the distinguished Dominican scholar, John Adamson, who was the University of Aberdeen’s first professor of Theology.

Sunday’s events form part of the Chapel 500 programme, to mark the 500th anniversary of the consecration of the Chapel. Over the centuries the Chapel has witnessed great change, from its Papal foundation to the Reformation, the Jacobite risings, and the unification of King’s and Marischal Colleges in a single University. The academic term ahead will bring together various denominational traditions, welcoming preachers of the Methodist, Presbyterian, Roman Catholic and Anglican churches.

Professor Sir Duncan Rice, Principal and Vice-Chancellor of the University of Aberdeen, said: “Sunday will provide an opportunity not only to mark 500 years of the Chapel, but to welcome back those who have made a significant contribution to the University, students, staff and the wider community. The celebrations will honour the Chapel’s rich heritage and, in their variety, will embrace the diverse denominational traditions which have all played a part in its history. The Chapel has been an integral part of the University for 500 years and continues to play an important role in campus life.”

Reverend Dr Easter Smart, Chaplain to the University of Aberdeen, said:  “The celebrations will allow us to share the story of the Chapel with the wider community. It is a treasured building with a complex and interesting history. The Chapel is a historic building still very much alive today as a practicing place for worship, lectures, music and much more. It belongs to the community and has a strong role to play so we are delighted to be able to welcome those from all denominational traditions, from the University community and from the wider area to join with us in our celebrations.”

Father James Claffey, Catholic Chaplain to the University, said: “We are unique in the UK and Ireland in having a regular Sunday mass in a sixteenth-century university chapel, and that has been a great success, with a regular congregation of around 120 students. We’ve also developed a reputation for the high standard of our liturgy, and it is a privilege to be able to open what we have developed here at Aberdeen to our distinguished guests.”

King's Chapel, dedicated to the Trinity and the Blessed Virgin Mary in her Nativity, was the heart of Bishop Elphinstone's new university. It was designed from the outset as a landmark –– all the stone of its finely carved-masonry was shipped from sandstone quarries on the Moray Firth, its windows were filled with costly coloured glass, and it had ‘thirteen bells pleasing the ear with sweet and holy melody’, the biggest of which weighed about 2,500 kilos, and stood 1.65 metres high. The chapel was begun, according to the inscription on the west front, on April 2, 1500, and was ready for dedication and consecration by 1509.

In Catholic thinking, although the essential meaning of the word ‘church’ is the Christian congregation, rather than the building in which it meets, the consecration of a church is enormously important. It is the point at which a structure ceases to be merely a meeting-place, and becomes in and of itself, a place formally dedicated to the service of God and withdrawn from other types of use. The practice of consecrating church buildings probably goes back to the time of the apostles, and a version of the form of consecration which is still in use survives from the eighth century. The ceremonial is long and complex, but key elements include the deposition of a relic, or relics, of martyrs of the faith, thus uniting the church on earth with the church everlasting, and the anointing of twelve crosses on the inner walls of the church with holy chrism, followed by the first solemn celebration of the Mass. The priest who officiates is normally the diocesan bishop. It is the anniversary of this moment, when the building was formally given to God, that we are celebrating this day.

The Chapel as it is now

The Chapel has seen many changes since its consecration, and little survives from 1509 other than the stone and the woodwork of the choir-stalls and screen: the current stained glass windows are a replacement for the originals, which were destroyed after the Reformation. Those in the chancel were designed by Douglas Strachan. Bishop Elphinstone's tomb, in its commanding position in the central space before the altar steps, was commissioned by Bishop Gavin Dunbar in 1519, while the renaissance pulpit with the arms of Bishop Stewart (1532–45) was originally made for St Machar’s Cathedral and was only re-erected in the Chapel in 1844. The late sixteenth century saw the removal of all the Chapel’s altars and statues, while Elphinstone's effigy, which once adorned his tomb, was destroyed in the Civil Wars of the 1640s. For the two hundred years after 1600, mostly Episcopal worship was intermittently held in the Chapel, ending with the failure of the 1715 Jacobite rising. In 1826 preaching resumed at King’s on Sunday mornings. Architecturally, the Chapel assumed much the form which can be seen today in the 1920s and 1930s, under the sensitive direction of Dr William Kelly, who also designed the war memorial in the ante-chapel and the lettering on the tomb of the founder.

Those wishing to attend any of the services or events this autumn should contact the University Chaplaincy Centre via telephone on 01224 272137 or email to chaplaincy@abdn.ac.uk