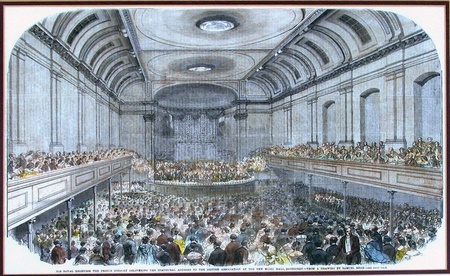 As Techfest September gets underway, the University of Aberdeen looks back at its 19th Century counterpart – staged in the Granite City 150 years ago this week.

Aberdeen played host to British Association for the Advancement of Science for the first time in 1859 for a week-long event.

The ‘BA’ had been founded in 1831 as a networking opportunity for the country’s scientists and for the presentation of current science to the public at large.

The cause was taken up by the leading scientists in the country, across the scientific disciplines from mathematical and physical science through chemistry, geology, biology, geography, economic science, statistics and mechanical science.

The Music Hall was built especially for the event, as a development of the existing Assembly Rooms.

It was capable of holding about 2,500 people and so successful was the meeting that associate membership, necessary to gain access to the proceedings, had to be capped.

Prominent among the local organisers were Professors James Clerk Maxwell (Natural Philosophy) and James Nicol (Geology) of Marischal College.  Prince Albert, the Prince Consort, took on the role of President for the year.

He is shown in the accompanying contemporary illustration opening the meeting with a thoughtful address.

The young Maxwell himself, still only 28, spoke on three different subjects, one being a presentation of his newly discovered law of molecular velocities in a gas.  The ‘Maxwell distribution law’, as it is now known, is the law of physics with the strongest Aberdeen connection.

One notable event at the meeting was the demonstration of wireless telegraphy across the River Dee by the Dundonian James Bowman Lindsay, not a demonstration of radio more than 30 years before Marconi but a development that Senatore Marconi himself noted in the foreword to Lindsay’s biography.

Another event that had historic consequences was the appointment of a committee for the purpose of making upper atmosphere observations by balloon.  As a result, James Glaisher made a pioneering series of 28 ascents over several years in the 1860s, determining for the first time the rate of decrease of temperature with height and other factors that are of key importance in meteorology.

In addition, Sir Charles Lyell, President of the Geological Section of the British Academy, and a champion Charles Darwin’s work, made one of the first announcements that Darwin had undertaken a body of work on evolution and was about to release his findings

Women also played their part and the whole meeting was attended by a very large number of ladies, with a total of 861 enrolled. This was perhaps indicative that there was a latent demand for access to higher education by women.  In fact it was to be their daughters rather than the attendees who would be the first women to graduate from Scottish Universities in the 1890s.

The organisers felt that they might be risking something in holding the meeting much further north than they had done before but in the event the Aberdeen meeting was the most well attended the BA had ever had.

Dr John Reid, Honorary Curator of the Natural Philosophy Collection, said: "The 1859 British Association Meeting was a significant event for Aberdeen and indeed for Marischal College with many of the day's foremost scientists descending on the Music Hall to share their ideas with one another and the public".

Dr Ken Skeldon, of the University’s Public Engagement with Science Unit and British Science Association Aberdeen Branch, added: "The British Science Festival is just as important today in engaging the public with science. The 1859 event was the first time the meeting had come to Aberdeen, and was the best attended festival to that date"