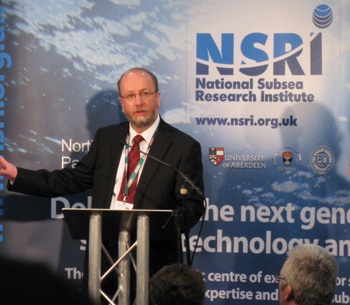 A new research institute which could help UK companies capitalise on a global subsea market worth a potential £40 billion was launched today (Wednesday 11 February) in Aberdeen.

The National Subsea Research Institute (NSRI) will open the door to the fast-track development of a new wave of subsea technology and expertise in which the country already leads the world.

The institute, which will be based in Aberdeen, was launched by Jim Murphy, Secretary of State for Scotland at Europe's biggest subsea event – Subsea 09.

It has been established by Subsea UK, the industry body, and Aberdeen, Dundee and the Robert Gordon Universities via the Northern Research Partnership in Engineering. The aim is to ensure the UK retains its market-leading position and captures a significant share of the global market worth £25 billion at present and estimated to grow to over £40 billion by 2011.

With 40,000 employees in 750 companies contributing £4.5 billion to the economy, the UK subsea sector leads the way around the world but industry body, Subsea UK has long been campaigning for a national framework for research, development and implementation of technology that brings together industry, academia and government to make sure the sector remains at the forefront.

"Subsea skills and technology are vital to the recovery of oil and gas reserves around the world, particularly in mature offshore and deepwater provinces," said Alistair Birnie, chief executive of Subsea UK. "Industry-led and demand driven, the NSRI will address the longer-term challenges the subsea industry faces. Today's launch represents a major step-forward in our overall strategy to create a global centre of subsea excellence in the UK.

"A flagship research organisation, the NSRI will also act as a showcase for UK expertise and skills in subsea. It will create value and inspire the future of the global subsea industry."

NSRI takes advantage of the know-how and innovation of the partner organisations who collectively bring together academia, industry and the supply chain to develop a national strategy that will be aligned with the needs of the industry in the short and long-term both within the UKCS and internationally.

This strategy will co-ordinate and facilitate the delivery of a sustainable UK base in subsea technology and skills that will create long-term opportunities for academia, the industry and the UK economy as well as supporting sustainable exploitation of oil and gas around the world.

Professor Albert Rodger, Vice-Principal and Head of the College of Physical Sciences, University of Aberdeen and chief executive of the NSRI added: "NSRI will offer clear benefits to industry, academia and the UK economy.  It will combine industry and academic funds to support its national programme and will link technology projects to other national and international programmes to avoid duplication and ensure a co-ordinated approach.

"Research will be channelled through projects with over-arching themes aligned to specific industry needs, some of which have been identified as fluid recovery at 3,000 metres of water depths at economical cost, platform-less developments, long-distance tiebacks, subsea process facilities, pumping and separation."

Scottish Enterprise is providing support to the NSRI, which has also captured the imagination of the industry with five companies – BP, Chevron, ConocoPhillips, Subsea7 and Technip - already pledging funds and several others about to commit.

NSRI will develop its own research strategy and core strengths in areas of research not presently being addressed by other research establishments. It will also develop strategic relationships with other research and development providers within the UK and overseas.

Supporting the launch of the NSRI today, Scotland's Secretary of State, the Rt Hon Jim Murphy, said: "I am delighted to launch NSRI which I have no doubt will become  internationally recognised as a research centre of the highest quality, positioning the UK at the cutting edge of energy technology. A co-ordinated, pan-industry research and development programme embracing the leading oil and gas companies, the supply chain and academia will make sure that the UK continues to lead the world in subsea."

A not-for-profit company limited by guarantee, NSRI will be chaired by Subsea UK chairman, Bill Edgar.