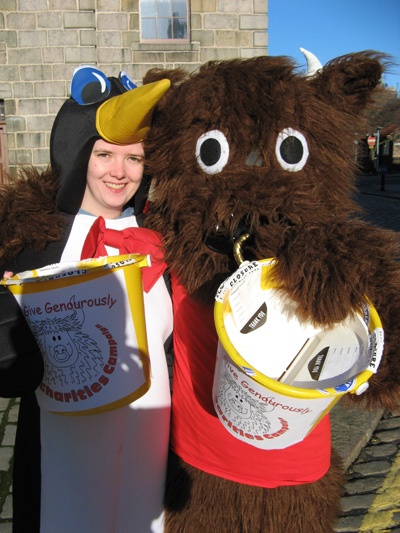 Aberdeen’s Torcher Parade has fallen victim to the credit crunch.

Students are struggling to find a sponsor for the carnival event, which sees an army of colourful floats make their way through the city and raises thousands of pounds for North-east charities.

A crowd of over 10,000 regularly lines the streets for the annual event, planned to go ahead on May 2 this year.

But organisers fear that without a sponsor they will have to use charity money to pay for the costs of running the parade.

The blow comes after last year's Torcher Parade was cancelled after a motorbike ploughed into a van and the crowd, injuring 12.

"With the motor accident ahead of last year's Torcher Parade we were really hoping for a change of fortune this year but we've had no such luck," says Sandy McKinnon, VP Charities.

"We've been looking for a sponsor for the Torcher Parade for a couple of months now but a lot of companies are unable to offer sponsorship in such tough economic times".

The cost of running the Torcher Parade is vast, and, without a sponsor, it has to be paid for by the donations of attendees.

Sandy said: "We would rather see the money we raise banked for charities as opposed to paying for skips and a road sweeper but those items are essential to the running of the parade, and must be paid for somehow."

The Torcher Parade has relied on local businesses for lorries and supplies. Now, in the absence of an overall sponsor, students are asking businesses to bid for individual floats, which they will be free to decorate and use to promote their firm.

"But it seems that companies are not willing to make that kind of a financial commitment so we knew we needed to adjust our packages to fit the current financial climate businesses are operating in."

The Charities Campaign are planning on opening up a small handful of lorries to companies on a first come first serve basis. If you are interested in promoting your business to thousands of Aberdonians, then please get in contact with them directly. Shannon Tubby can be contacted on 01224 272982 or s.tubby@abdn.ac.uk

Aberdeen Students' Charities Campaign is a registered Scottish Charity set up by students at the University of Aberdeen which run events to raise money which is disbursed to local and national groups and organisations on an annual basis.

The events include the annual Torcher Parade, Student Show and Schools Collections.

This years Torcher Parade is on Saturday May 2.

Events involve not only students of the University of Aberdeen, but also those from RGU and Aberdeen College as well as thousands of Aberdonians each year.

Last year Aberdeen Students' Charities Campaign disbursed £50,000 in total, with single awards of up to £5,000 to several local organisations including Breast Cancer Research.

Aberdeen Students' Charities Campaign is a registered charity in Scotland, No. SC008700