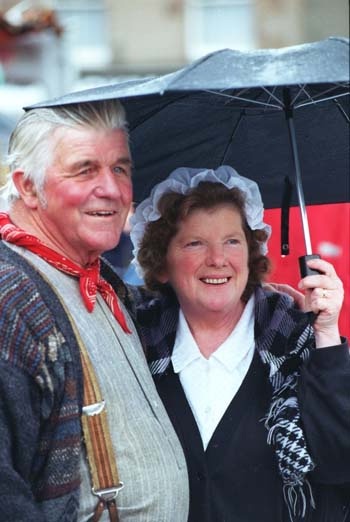 A popular weekend of traditional singing is expected to draw enthusiasts from across the country to an Aberdeenshire steading.

The event, organised by the University of Aberdeen's Elphinstone Institute and Cullerlie Farm Park, will bring together outstanding performers for a weekend which includes a host of workshops and talks.

On the bill will be acclaimed singers from the UK and Ireland and the weekend will offer an unrivalled opportunity for enthusiasts to hear, enjoy, and join in unaccompanied ballads and songs.

Guests will include James Graham, a Gaelic singer from Lochinver – the 2004 BBC Scotland Young Traditional Musician of the Year; Ken Hall who champions unaccompanied singing in London at the Musical Traditions Club and the Keith Summers Festival; Alana Henderson a young singer from Belfast who sings in both the English and Irish languages; and Roger Hinchliffe, son of the legendary Frank Hinchliffe, who sings his father's songs and those he learnt from his mother's brother, the late Stanley Marsden.

In addition, Gordeanna McCulloch from Glasgow; celebrated songwriters Adam McNaughtan from Glasgow and Con 'Fada' Ó Drisceoil from Cork; Hector Riddell from Leochel Cushnie, the 2009 Elgin Bothy Ballad Champion; and Irene Watt from Banchory Devenick, a PhD student at the Elphinstone Institute, will all perform.

The event also features full-time singer and singing teacher Christine Kydd, who delights in the songs of Robert Burns, to whom she is distantly related.

This year's Cullerlie weekend will have a special focus on the National Bard to tie in with the Homecoming Scotland 2009 celebrations, with a talk and workshop on Burns commemorating the 250th anniversary of his birth.

It will also provide the stage for the launch of a new DVD and CD featuring highlights of the 2008 festival. Ye'll nae beat Cullerlie has been produced in tribute to Tom and Anne Reid, who helped to found the festival in 2000, and includes archive footage of the couple.

A 48-page illustrated book of verse, song and prose, entitled Tom and Anne Reid - a Life in Song will also be unveiled at the festival.

In addition to the wide selection of music, there will be demonstrations of traditional farm crafts such as blacksmithing, straw platting, thrashing and farmhouse cooking, as well as a tour of the farm museum.

Weekend tickets for the event have now sold out but individual tickets can still be booked for the Saturday evening and Sunday afternoon concerts.

Dr Ian Russell, Director of the Elphinstone Institute, said: "It promises to be a wonderful festival. Ticket sales have gone really well and all our guests are coming.

"This is the only event of its kind in north-east Scotland. There will be something for everyone and we are delighted that the DVD and book in memory of Tom and Anne are to be launched at the festival."

For further information on the guest singers, visit http://www.abdn.ac.uk/elphinstone/events/cullerlie09/index.shtml or phone the Elphinstone Institute on 01224 272996.

In 2007 the event was shortlisted for 'Event of the Year' at the Scottish Traditional Music Awards.

Cullerlie Farm Park and Heritage Centre was set up by Tom ('Tam') and Anne Reid in 1993 and is now run by Anne's daughter, Tracey and her husband Eric Walker, together with other members of the family. Tom moved to the Cullerlie Estate with his parents when just a toddler in 1935, and worked with his father in the traditional way of farming. He kept the traditions alive by turning the old original steading into a farm museum with one of the largest privately owned collections of farming and domestic memorabilia in Scotland.

Anne was also a fine singer and promoted the traditions of the North-East through singing and speaking workshops with schoolchildren and adults at local schools, and at the museum, as well as hosting regular Saturday-night ceilidhs. It is her family's express wish that the festival should continue to run in memory of Tom and Anne.

The Park nestles at the foot of the Hill of Fare where the battles of Corrichie and Cullerlie Moor were fought. It is 6 miles north-east of Banchory and 12 miles west of Aberdeen. From Aberdeen follow the A944 to the Westhill roundabout, then fork left on the B9119 to Garlogie, then fork left again on the B9125 for 3 miles. The Park is on the right.