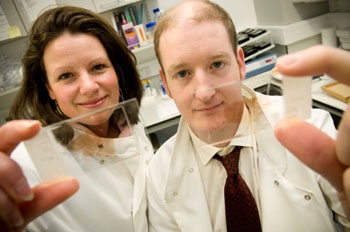 Pioneering research that could potentially lead to better and earlier diagnosis of Alzheimer’s disease has received the backing of an offshore operator.

Maersk Oil North Sea UK Limited (Maersk Oil) has given £10,000 to the Alzheimer's Research Trust to help fund one of a range of leading studies into neurodegenerative diseases being conducted at the University of Aberdeen.

The company held a series of fundraising events throughout 2008, co-ordinated by the Maersk Oil Sports and Social Committee. The project Maersk Oil is supporting is exploring specific proteins - the building blocks of cells - in the brain.

This is the first time scientists have studied these specific proteins.

Dr Jan Mulder, Alzheimer Research Trust Research Fellow at the University, and Principal Investigator of this study, said: "We are delighted to receive the support of Maersk Oil for our research project which is exploring in close detail what happens to certain proteins found in a brain affected by Alzheimer's disease.

"We are trying to find out the functions of these proteins as these are not yet understood.

"Ultimately our aim is to see if these proteins can be used as diagnostic tools of this devastating disease.

"If so, the proteins could potentially pave the way for earlier diagnosis of Alzheimer's disease and probably also other dementias."

Rebecca Wood, Chief Executive of the Alzheimer's Research Trust, said:  "We're very grateful for this support; the work that Dr Mulder is leading at the University of Aberdeen is vitally important.

"By improving our methods of diagnosis, people with dementia can begin to plan for the future and potentially access drugs at a stage where they can be more effective.

"Over 60,000 people in Scotland have dementia; this is a number forecast to double within the next generation. We must invest in research now to offer hope for the future."

Emily Ferguson, chair of the Maersk Oil Sports and Social Committee, said: "Alzheimer's is an illness which affects the lives of a great many people across Scotland and we felt it was important that money raised by colleagues in Aberdeen went to a charity supporting research projects in the North-east.

"Dr Mulder's work is unique and exciting and we hope that the financial help that this donation brings will assist the team at the University in finding some way towards speedier and more accurate diagnosis."

Donations are helping to take forward leading research into Alzheimer's disease and dementia at the University of Aberdeen.

Local companies, charitable trusts and foundations and friends and families who are affected by the disease have given almost £100,000 to the University in recent years.

Media are invited to attend a photocall today at 10.30am at the University of Aberdeen's Institute of Medical Sciences where Maersk Oil will be handing over a £10,000 donation towards Dr Jan Mulder's project. Please confirm your attendance with Patrick McFall on 01224 272013.